A day off from work meant only one thing.....a bit of patch birding. Although it remained cold, the bright blue sky and warm sunshine had clearly confused many of the local birds.

Driving along Carr Lane I spotted a flock of Chaffinch flying around on the edge of Great Boar Wood; a quick scan picked up at least 4 Brambling among the 70+ Chaffinch. Bird song drifted out of the wood and with Great Spotted Woodpecker drumming away the birds clearly thought that it was already Spring. 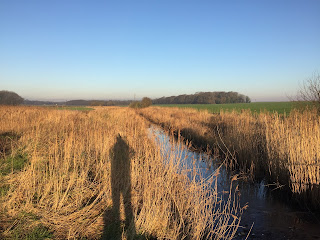 The bridge and flooded field at Carr Lane were surprisingly quiet, but a bit of pishing eventually enticed the Chiffchaff out of hiding. The finch theme continued with Linnets constantly on the move, and a group of 9 Siskin joining the larger flock of Goldfinch in the alders on the edge of Great Boar Wood.

Realising I had missed the high tide (which seems to be a recurring theme these days!!) I quickly made my way to Hale Lighthouse. Settling into my favourite spot just to the west of the Lighthouse I started to scan the Mersey, but as expected the tide was quickly receding and any hopes of finding a stray sea-duck or diver were evaporating before my eyes. 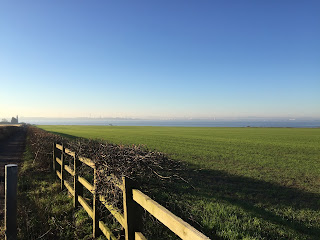 Turning my attention to Frodsham Score I quickly picked out 7 Bewick's Swan sat away from the Whooper and Mute herd, and may indicate they were freshly arrived birds? Better still were 4 Egyptian Geese (presumably part of the group of 5 seen on the 10th) sat on the edge of the Score in front of the Canada Geese, a difficult bird to catch up with on the patch and only my second record since I started to watch the area. 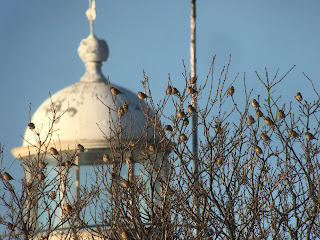 Moving to the east of the Lighthouse it was evident that the big finch and bunting flock was still present, although they had now separated into a number of individual groups. I spent about 2 hours grilling the finches which was great fun, but not overly productive. Final combined totals were c.450 Linnet, 37 Goldfinch, 11 Chaffinch, 2 Greenfinch and 1 Lesser Redpoll, whilst Buntings were represented by c.68 Reed Bunting and 12 Yellowhammer. Meadow Pipits seemed to be everywhere with a low estimate of 75, and a minimum of 3 Rock Pipits which managed to constantly evade a picture!! 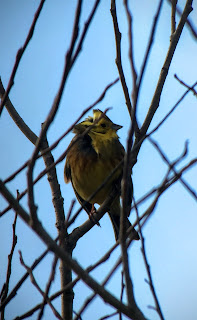 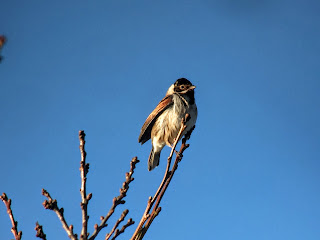 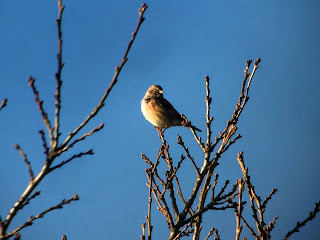 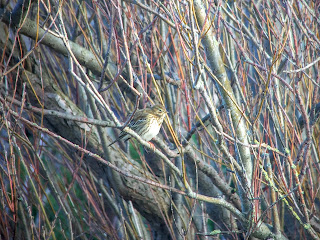 Whilst chasing the finch flock I still managed to keep an eye on Frodsham Score and picked out a juvenile Marsh Harrier and 4 Pintail came in to feed with the Mallard flock by the Lighthouse, but the Mersey remained relatively quiet. Having failed to pick anything exciting out of flock and the fact that my feet were now soaked (note to self - remember wellies when walking the shore!!), I decided to head back to the car and move round to Within Way. As I was about to get in the car I heard a number of agitated finches from behind the turning circle; peering over the hedge a very smart ringtail Hen Harrier was flying away over the fields towards Hale Marsh. 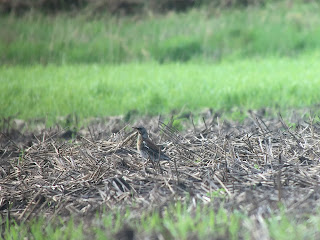 Within Way and Hale Marsh was fairly quiet, with a single Peregrine sat out on the marsh and a couple of Ravens picking over the remains of a Canada Goose. A Kestrel allowed me some nice close views, and a Little Egret turned out to be my only Egret for the day (not sure where they have all gone!?). The fields by the farm held a nice winter Thrush flock with c.60 Fieldfare, 5 Redwing, 17 Mistle Thrush; hopefully it'll turn up a mega before this winter is out. 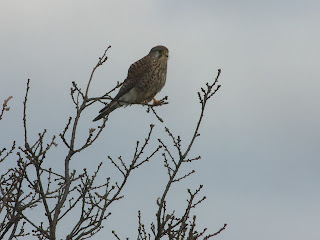 Calling in briefly at Carr Lane Pools I picked up a single Ruff in the flooded section by Town Lane; an unseasonably early record for patch. Teal numbers have picked up nicely with about 350 now present, sadly the Green Winged from across the water hasn't decided to pay a visit yet.....
So 9 new additions to the patch year list today leaves me on 109; already 10 head of the January last year. At this rate I'll be hitting 300 by the end of year.......or it could mean a very slow second winter period. Whatever happens you can't beat a day out birding on patch.﻿
﻿