Due to a mixture of work and best man commitments this was my first visit to patch in over two weeks; possibly my longest gap in patch birding in the last 18 months. Reports of decent birds trickled out during my absence and I was desperate to get back out in the field.

Waking up early I thought I would brave the sub-zero temperatures to see whether I could catch up with some Owls, having failed to connect with any on the 1st. Skidding my way along Carr Lane I noticed a brown lump in the road; a Woodcock!! Cold snaps are great for catching up with them on patch and today was no different, seeing a further 3 along Carr Lane. 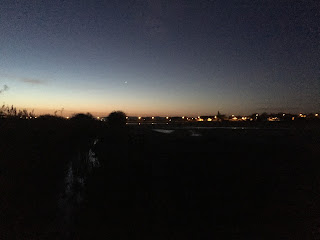 Pouring myself a coffee; I stood on the bridge on Carr Lane and quickly picked up Tawny Owl, Snipe, Water Rail and loads of calling Grey Partridge. A rather hurried splashing in the stream alerted me to 7 Tufted Duck trying to escape from just below my feet; an unseasonal record, usually not returning to patch until late March. Scanning the flooded field in near darkness I picked up 4 geese, who clearly didn't like me putting my tripod up.....but at least their 'wink-wink' call gave them away.

Pleased with the start I drove round to Hale Park, where a Barn Owl has reportedly been roosting and feeding recently. Sadly there was no sign; and the prospect of loosing my toes to frostbite made me move on quickly. Whilst getting into the car I noticed two large flocks of Cormorants, totalling in excess of 100 birds flying NW over?! Presumably local birds going to feed on the coast?

Moving onto Within Way, it was evident that the cold weather had pushed some birds in to the area, with 3 Yellowhammer and good numbers of winter thrushes feeding in the first field. The Little Owl put in a brief appearance in its normal roosting tree, and a Merlin bombed through causing the passerines to scatter. 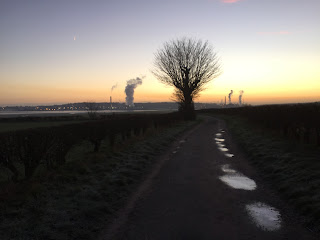 Other than the normal coveys of Grey Partridge, the only noteworthy birds were the very large numbers of 'big' gulls on the move. Scanning the Mersey towards Pickerings/Runcorn there was almost a carpet of white, quite possibly the largest gull gathering I have seen on this section of the Mersey. What I should have done is gone straight round to Pickerings Pasture, but hindsight is a great thing!! 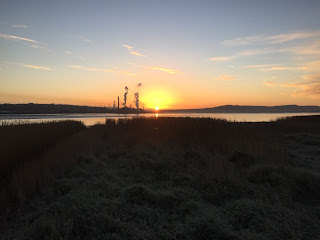 Scanning the Mersey from the end of Within Way I picked up a number of new birds for the year including Rock Pipit, Common Sandpiper, Great Crested Grebe and Med Gull; whilst 4 Pinkies that flew towards Frodsham Score were presumably the same birds that were earlier on Carr Lane. The gull numbers still looked very impressive, so I decided to give up and head round to Pickerings Pasture. 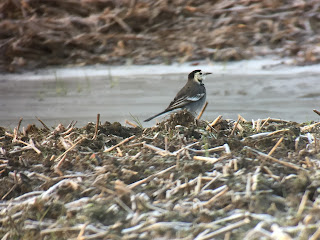 Despite it only taking about 20 minutes to get back to the car and around to the carpark at Pickerings,  my decision was clearly flawed; with the mudflats nearly devoid of any gulls by the time I got there!! Bullfinch, Great Spotted Woodpecker and Siskins in the carpark lifted my mood, as did the small groups of waders including my first Knot and Golden Plovers of the year. Walking up to the White bridge I scanned the remaining Gulls (down to a measly 1000 or so) but found nothing of note. I finally picked up the 1w Shag; which seems to have relocated nearer to the Runcorn Bridge. 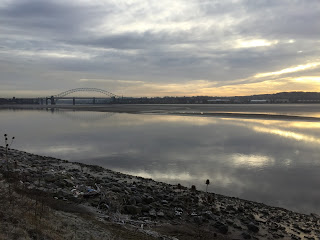 Moving back to Hale Lighthouse, I hoped I might pick something out on Frodsham Score or on the river. A quick scan only produced the Whooper Swan herd, which has now increased to 16. A small group of passerines flying into the weedy field just east of the lighthouse gave me a welcome diversion from scanning a rather empty estuary. Walking just past the end of the Lighthouse garden I quickly picked up a nice mixed flock of Linnet, Goldfinch, Yellowhammer, Reed Buntings and Meadow Pipits feeding on the salt marsh. Hoping to pick out the recently reported Twite, I continued to scan the flock when I suddenly heard a loud 'prrrrrt' from behind me. A massive group of c.200 Linnet had just flown up from the weedy field, which contained a Lapland Bunting! My first patch lifer of the year, and a welcome grip back having failed to connect with any of the five birds that were seen last autumn. I spent the next half hour trying to see the bird on the deck, amongst the deep weeds. Although I saw and heard the Bunting on a number of further occasions I failed to get views on the ground. A Merlin shot through causing chaos and revealed that there were even more birds hiding away with final estimates of c.350 Linnet, c.50 Goldfinch, c.30 Chaffinch, c.90 Skylark, c.40 Reed Bunting, c.10 Yellowhammer with numerous Meadow Pipits adding to the fun. 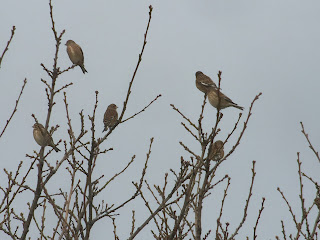 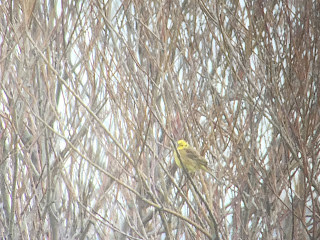 Having finally lost the use of my fingers and toes I decided to head home and warm up. All in all a very productive mornings birding, adding 14 patch yearticks which take me to 100 for the year. I am already 1 ahead of my January total for last year.....here's hoping it continues like this for the year!! 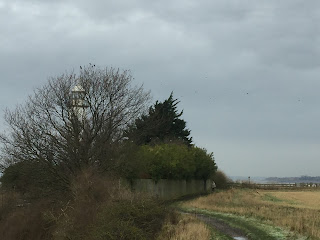