With Storm Gertrude battering the UK with strong winds, I was hopeful that a stray diver, auk or seaduck would put in an appearance on patch during the high tide. It wasn't until I reached the turning circle on Lighthouse Road that I realised just how strong the winds were. 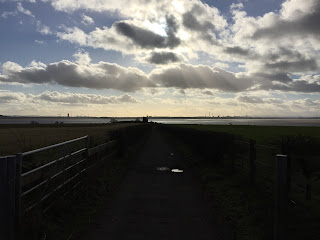 The recent finch and bunting flock were keeping their heads down, and it clearly wasn't going to be a day for passerines. A group of 200 Linnets briefly popped out of the weedy field, but quickly settled down and were not seen again. It makes you wonder just what else is hiding in there! Setting up the scope I started to scan the river, but after being knocked over by a few particularly strong gusts I decided to try and find a bit more shelter. 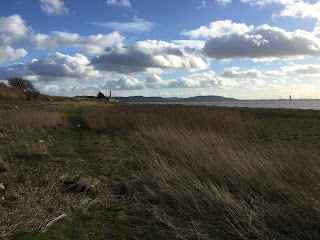 Walking the shore west of the lighthouse I kicked out a Jack Snipe and 8 Common Snipe, before I nearly stepped on a Short Eared Owl. After a good influx from late autumn Short Eared numbers have dropped off on the Hale side of the Mersey, probably due to disturbance and the temptation of the quieter fields of Frodsham.

Having found a few bushes to shelter behind I spent the next hour and a half scanning the river and Frodsham Score. The Mersey was disappointingly quiet, with the sole highlight being a smart male Red Breasted Merganser; no divers or auks decided to put in an appearance, but conditions were testing with a deep swell. Frodsham Score was marginally more productive with 100+ Pink Footed Geese, 14+ Whooper Swan, Great White Egret, 12 Raven and Marsh Harrier. As the tide pushed in further the waves of waders increased with thousands of Dunlins and Redshank, but best of all 3 Bar Tailed Godwit, my first of the year on patch. 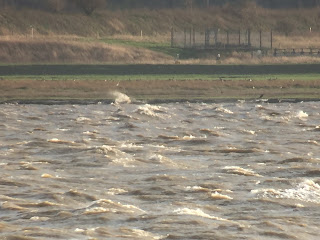 A hail shower that pelted hail at my frozen face like a BB gun, was the final straw, and I decided to beat a quick retreat to the car. The Curlew roost in the weedy field had grown to 157, but otherwise the rather brisk walk back was uneventful.
Moving round to Pickerings Pasture for the Gull roost, I had a brief look at the feeders and was pleased to find a (the?) Tree Sparrow. I had a single bird in the same area just before the New Year at the feeders, and given their status locally it would seem likely that it was the same bird. There was no sign of the mixed finch flock that had been reported recently, but there were a few Bullfinches and smaller numbers of Goldfinch and Greenfinch. 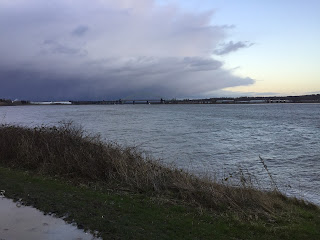 The numbers of Gulls were not massive, and sadly contained no Yanks or White Wingers; but I did pick out 3 Yellow Legged Gull and 5 Mediterranean Gull. Hopefully there is still plenty of time left this winter to pick out something good (and maybe finally put my Glaucous nemesis to bed!). 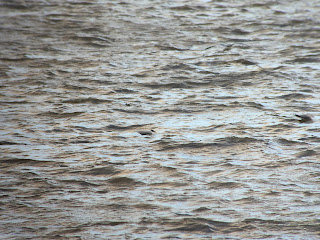 Whilst watching the Gull roost I watched at least 3 Peregrines go to roost under the Runcorn Bridge, presumably a slightly more sheltered roost site than the usual exposed pillars.

The light was quickly going and any chance of picking out a decent gull was fading. I decided to give the reported Barn Owl roost site a go. Stationing myself on the edge of Hale Park I scanned the farm buildings, watching large groups of Fieldfares and Redwings making their way to roost. I was about to give up and go home when finally, in near darkness the Barn Owl popped out of one of the outbuildings before heading off north over Hale village. The direction of its departure may account for the recent reports of a single along Ramsbrook Lane.

So a further 5 additions to the Patchwork Challenge which takes me to 114. Already 15 ahead of this time last year, but only one "new" bird over 2015. Let's see what Storm Henry brings with it.
Posted by daveliverbirder at 13:04