I managed to get away from work a little earlier to get some late afternoon birding in on patch (these dark nights are a killer for getting any midweek birding in). It was still pretty cold, though the easterly breeze had thankfully subsided from the last few days; however it had left a fairly murky low hanging cloud in it's place. 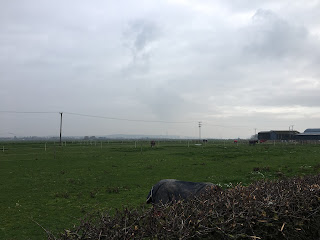 I had a mooch around Burnt Mill Farm and had a good check through the Meadow Pipits that were bouncing between the fields and the paddocks. A Common Buzzard was sat along the fence line, whilst a couple of Kestrel were hunting in the area - probably the reason why there were only small number of Goldfinch and Linnet buzzing around. 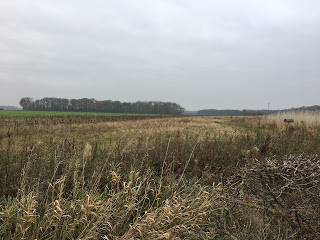 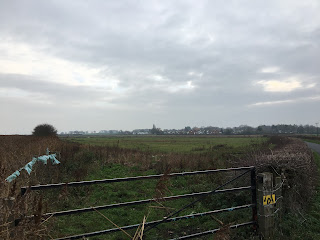 Moving down Carr Lane I checked out the former Ibis Pool where a Sparrowhawk was hunting the sunflower strip. The mixed finch flock of c.50 Linnet, 20 Goldfinch and 12 Greenfinch along with a handful of Reed Bunting didn't want to settle. A Water Pipit flew over and headed back towards Carr Lane Pools, and small groups of Meadow Pipit were moving about. The Pools seemed fairly quiet other than 2 Shelduck and a handful of Eurasian Teal and 4 Shoveler, although viewing is still limited due to the height of some of the weeds. 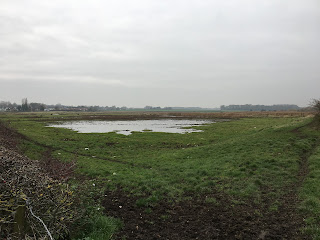 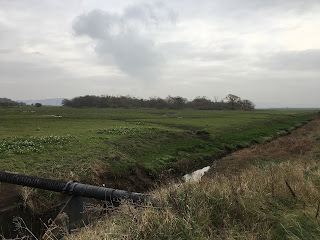 Moving to Town Lane, I parked up on the bridge and scanned the Decoy Marsh. c.12 Pied Wagtail and a single Meadow Pipit were feeding close in, but there was no sign of any Water Pipit. A single Little Egret and a flyover Grey Wagtail were the only other birds of any note. The 3 Mute Swan were again in the fields on the opposite side of the road. Turning my attention to the Town Lane floods. A single Water Pipit and 2 Common Snipe were feeding on the section closest to the bridge. Walking back towards Hale village I picked up some large groups of Pipits heading my way. As they all dropped into the weedy section of the main pool I counted at least 9 Water Pipit and c.60 Meadow Pipit. I'm not sure whether the murky conditions were getting them to go to roost earlier than normal? A check of the ducks only found Eurasian Teal (c.140) and a single Redshank. 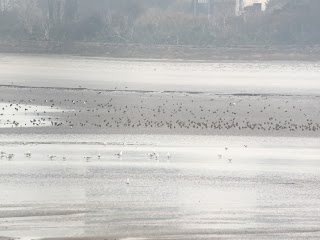 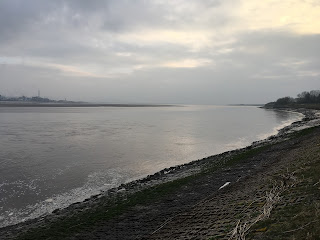 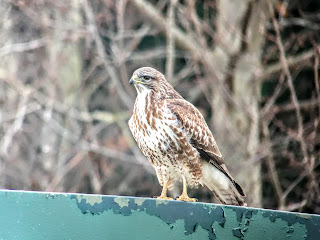 I headed round to Pickerings, planning to check the Gull roost and waders. However as is often the Gulls and waders were present in good numbers but were all far too distant to do much with (mostly all on feeding on no mans land or the section closest to the Runcorn Bridge). c.1000 Golden Plover, c.700 Lapwing and c.2000 Dunlin was about as much as I could pick up in the distance. A Common Sandpiper was again feeding along the rocky edge. A look through the very distant big Gulls didn't produce anything too obvious although the light was terrible. A Common Buzzard was sat on top of the visitors café whilst he hedges were alive with finches and mixed tit flocks. Given the conditions I decided to give up on Pickerings and head back round to Within Way to watch the roost. 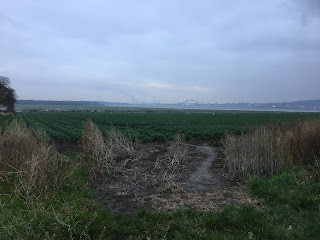 I walked along Within Way to view from near to the sharp bend. A good spread of Canada Geese sadly didn't hold anything else. I picked up the ringtail Hen Harrier as it scattered some of the Skylarks and Reed Buntings in the field. Looking back down towards Hale Marsh I had a couple of brief views of the Short eared Owl as it frustratingly kept low over the marsh and just below the reeds. Grey Partridge and Meadow Pipits were a constant background noise by now. I was joined by Paul Long just as a Barn Owl emerged and headed back towards Hale Village, and a Merlin followed shortly after. Surprisingly I didn't see a single Egret entering the decoy roost tonight (the rather unpredictable nature of the decoy roost is both exciting and frustrating in equal measures at the moment). With the light almost gone I decided to head to Carr Lane to have one last check for Woodcock. A pair of Water Rail were squealing away from the former Ibis Pool area, but despite waiting until well after dark I didn't pick up any Woodcock, although there were loads of Eurasian Teal and Common Snipe moving about. Not a bad couple of hours on patch, and a nice end to the week.