By the time I got out onto patch it was the birding equivalent of last orders at the bar. With the light fading fast and a chilly easterly breeze, the lack of available light left was not being helped by the thick dark clouds rolling in. 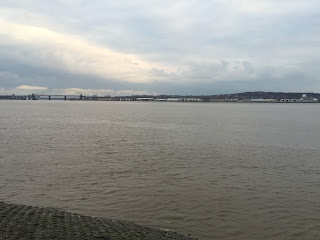 An adult Mediterranean Gull joined the Black Heads in scavenging for scraps of bread by the car park at Pickerings Pasture. A Peregrine sat on the Runcorn bridge surveying a few pre-roost Starlings daring to come near it, and a fewBullfinch trumpeted from the Hawthorn behind me. The gulls were, as usual, rather distant due to the tide height; the numbers weren't that great, and scanning down the Mersey I kicked myself seeing the numbers that were gathering off Within Way. However I persevered and the gull numbers, and especially the "bigger" gulls eventually picked up. I managed to pick out 5 Yellow Legged Gulls (3 x adults, 1 x 1w and 1 x 3w), but sadly no white wingers still. The highlight of my brief patch visit was the Starling roost that appeared to come out of the west side of Runcorn Hill/Frodsham area and headed over Runcorn Hill. I estimated in the region of 50,000 birds but I have a feeling I may well have severely under-estimated their numbers. 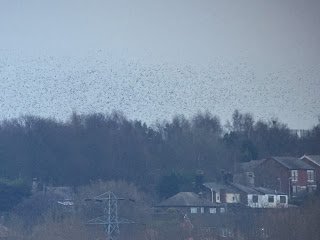 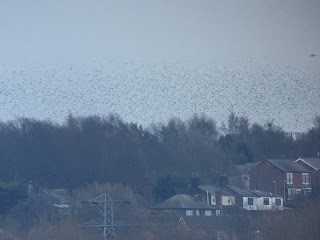 Having been joined by another patch stalwart Ian Igglesden, we continued to grill the gull roost. Failing to find anything further of interest, the light had deteriorated so much that it was a waste of our time to scan any longer. We decided to head around to the bridge on Town Lane, Hale to see whether there were any Owls kicking around. 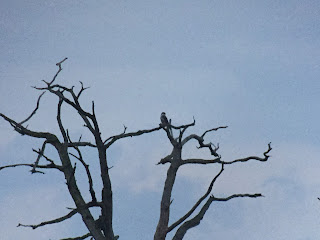 Parking at the bridge I quickly picked up a Peregrine roosting in the dead Oak trees on the edge of the duck decoy which we enjoyed in the gathering dark. We failed to pick up any Owls, and I was starting to feel rather cold when I finally picked up a Great White Egret flying into the decoy at 17.34. A second bird came into roost at 17.40. With Rob Cockbain having a bird here at 16.15, it is possible that there are in fact 3 birds roosting in the decoy tonight. 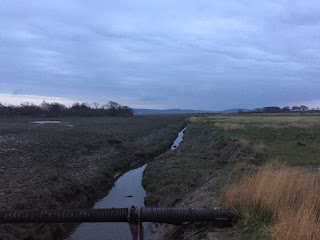 A number of Grey Partridge called from the fields at the back of Carr Lane Pools, but more surprisingly was a Red Legged Partridge. Although a pair bred on patch in 2015 I had not had a sniff of one since September, so a real bonus.

Calling in briefly at the bridge on Carr Lane for last knockings, I heard a Water Rail squealing and a Tawny Owl gave out a few hoots from Great Boar Wood. Not a bad rather short patch visit, but hopefully I'll get out for a bit longer tomorrow.
Posted by daveliverbirder at 12:57