The temperature had only just crept into positive figures by the time I reached Carr Lane; and despite the bright sunshine and blue sky, the biting easterly wind and frozen puddles reminded me it was still winter. 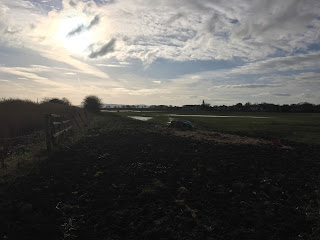 Driving past Burnt Mill Farm I noticed a fat bunting sat on the wires. Pulling over into the layby and winding down the window I could hear a Corn Bunting jangling away; clearly the birds are thinking Spring is just around the corner. Driving down to the bridge I stopped to check out Carr Lane Pools and the flooded fields. The pools were quiet with only a single Little Egret and c.65 Teal of note. The flooded fields and surrounds held good numbers of Grey Partridge and Skylarks, and a Peregrine was helping with the population control of Woodpigeons. A Kingfisher bombed down Ramsbrook, and Great Boar Wood was alive with singing woodland species (Great Spotted Woodpecker, Treecreeper and various tits). 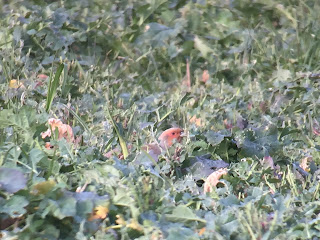 As the tide was low I decided to have a look at Within Way. The gardens opposite the entrance to Within Way were alive with Nuthatch, Goldfinch and a good number of House Sparrow amongst others. The fields were quiet and only a few Mistle Thrush and Fieldfare remained. The Little Owl was in it's usual tree but was far from showy; probably having more common sense than me by hiding out of the wind. 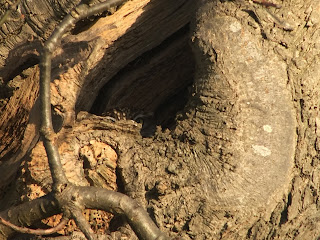 Hale Marsh was quiet, but a male Merlin was chasing some small groups of pipits and larks. Scanning further afield I picked up a minimum of 15 Common Buzzard, with a couple of the local birds already starting to display. Continuing to the end of Within Way I found one of the wintering Common Sandpipers on the rocks in front of me. A Rock Pipit that was in the little channel finally gave me my first decent views of this species on patch, and allowed me to finally assign one to race (this being a littoralis). 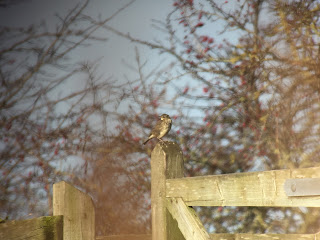 The Mersey was quiet, with most waders either opposite Pickerings Pasture or further out on the far banks of Frodsham Score. However a small group of Redshank that flew in also held something different, a Ruff; not rare on patch but certainly unusual to be seen on the Mersey. More Common Buzzard were displaying over Runcorn Hill, and a distant juv. Marsh Harrier soared over Frodsham. 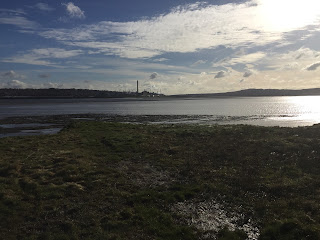 Having lost all feeling in my toes, a brisk walk back to the car and drive (with the heaters on full) round to Pickerings Pasture helped to rejuvenate me. The wader flock was for once close to the river wall, and contained 158 islandica Black-tailed Godwit (many already moulting into summer plumage), 96 Golden Plover (again many already starting to show signs of summer plumage) and roughly 3000 Dunlin. Rather surprisingly there didn't appear to be anything further of interest in the Dunlins, however they were tightly packed so something may have been hiding. 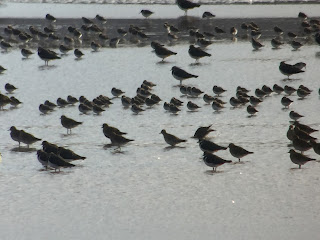 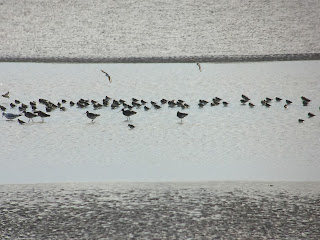 Meeting up with Ian Igglesden by Ditton Brook (the white bridge) we gave the gulls a good grilling, but surprisingly couldn't even find a Med Gull among the fairly decent gathering. It was interesting though to note that the majority of large gulls were adults with very few younger ages. The hawthorn hedges of the river wall held small numbers of Linnet, Goldfinch, a single Siskin over; whilst a few tit flocks moved through. However the dog walkers, runners and cyclists probably didn't encourage the recent Bullfinches or Firecrest to put in an appearance. 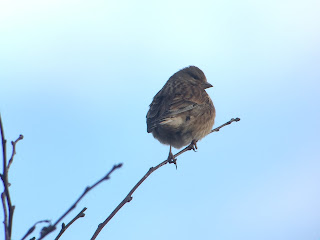 One final scan of the waders opposite the car park failed to reveal anything new, so I decided to cut my losses and retreat to the warmth. I'm starting to get that sinking feeling that I'm not going to find a white-winger this winter, but with news of a Glossy Ibis just over the water at Gowy there is enough enthusiasm to keep me going until Spring.