After a good opening session on patch, I had planned to get back out and hopefully catch up with some of the easy birds I had missed yesterday. The weather had improved drastically, and although it was still cold it was at least bright and sunny for the majority of my visit, although the clouds did roll in a little later. 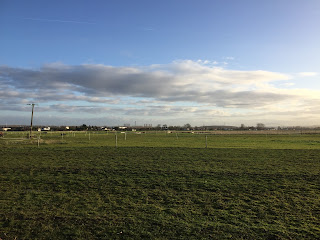 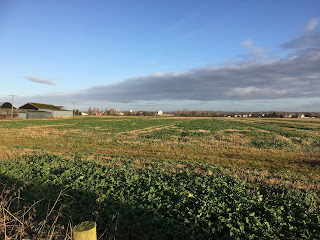 I again spent some time around Burnt Mill Farm, where I managed to locate a reasonable sized finch (Goldfinch, Greenfinch) and bunting (4 Yellowhammer and c.20 Reed Bunting) flock, but despite much scouring I failed to pick out any Corn Bunting. The first of many Jay (a bird I somehow missed yesterday) spent a while flying around the Farm garden, with a couple more flying over for good measure. 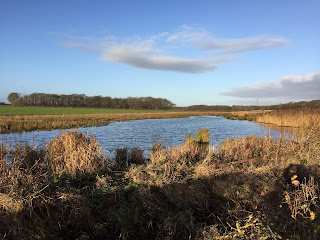 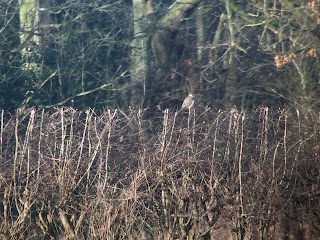 Parking up at the bridge on Carr Lane I could hear the Cetti's Warbler ticking and squeaking from the edge of Ramsbrook, although it remained hidden. A Water Rail was squealing, whilst the usual selection of ducks, Moorhen and Coot were about on the flooded field. A smart immature male Merlin was sat on the hedgerow at the back of the flood, although the bright sunshine meant getting any decent pics was surprisingly difficult. A single Water Pipit could be heard calling and was eventually located on the Carr Lane Pools side of the road. 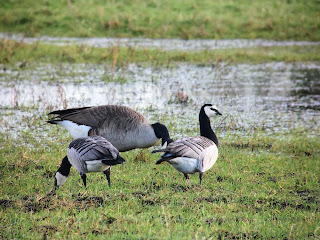 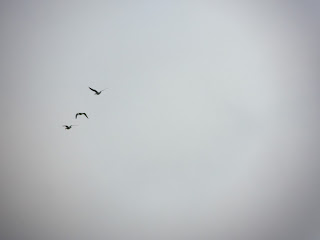 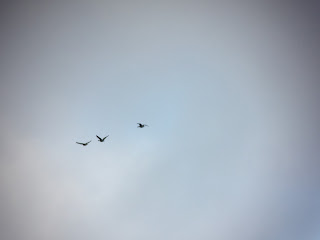 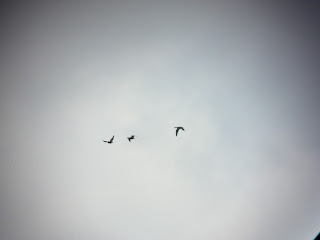 A large gaggle of Canada Geese were present on the Carr Lane side of the Pools today, and a bit of scanning revealed two smart Barnacle Geese amongst them. Walking back to the car I bumped into a local birder, Warren. As we were having a chat I heard some geese flying towards us, which I didn't immediately recognise (a rather out of tune, double "hunn-hunn"). On closer inspection they turned out to be Bean Geese, and I managed to fire off a few pretty poor record shots. Only my second patch record, and a quality local bird (although it appears that there are a few floating about the North Lancashire Mosses at the moment). 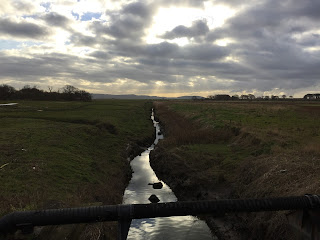 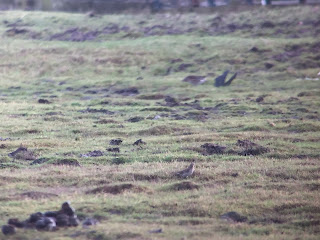 Warren headed off and I headed round to the bridge on Town Lane. After a bit of a search I eventually located 3 Water Pipit, which were strangely feeding on the decoy side of the road again. They are becoming increasingly difficult to see at the moment, and certainly not performing as well as they did in early December. Otherwise Hale Marsh and the flooded fields were very quiet, with only a couple of Little Egret, Common Buzzard and Kestrel. That was until a Sparrowhawk hurtled across Ramsbrook, disturbing a Green Sandpiper that had presumably been enjoying a quiet feed. 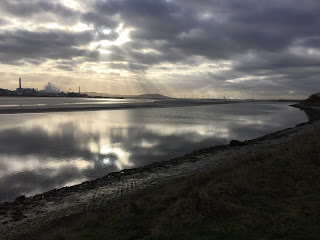 I had a brief look at Pickerings, noting the Bullfinch again in the hedge which runs down to the Mersey. The feeders held very little of note, although it is good to see the number of House Sparrow this winter. Scanning along the River I picked up a Great-crested Grebe, again a bird I had somehow missed yesterday. Waders were in relatively short supply with, other than the normal gathering of c.800 Lapwing and c.200 Golden Plover. A couple of Ringed Plover were milling about, but the majority of small waders were sat a long way out. A single Peregrine was sat up on the Runcorn Bridge whilst an adult Mediterranean Gull was floating about amongst the Black-headed Gulls feeding just east of Ditton Brook. I considered walking up to the bridge, but with next to no big Gulls, I decided to cut my losses and head round to Hale Lighthouse. 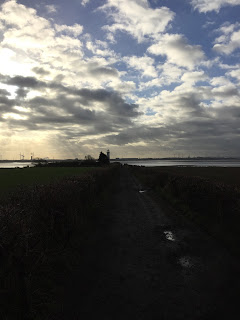 A scan over the Mersey from the top of Lighthouse Lane finally added Great Black-backed Gull to the yearlist, whilst I could also make out loads of Raven out on Frodsham Score (where had they been yesterday?!). An immature male Marsh Harrier floated out from Frodsham Marsh and fed along the Score and Ince Marshes. Continuing down to the Lighthouse I stopped again to have a proper look through the waders and picked out a couple more regular waders (Grey Plover and Knot) that I had somehow missed yesterday. 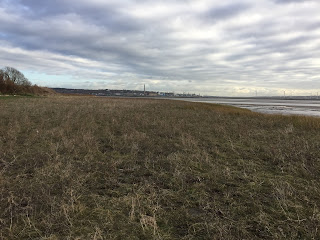 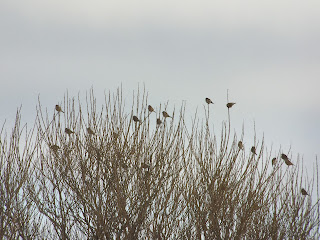 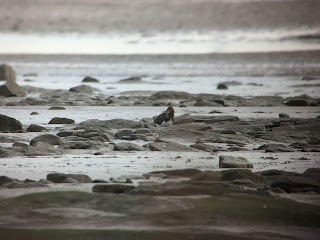 Clambering down the riverwall I walked the section of Hale Shore to the east of the Lighthouse, finally finding a small (c.60) flock of Linnet. Continuing on I flushed up to 5 Rock Pipit, 6 Common Snipe and eventually nearer to the reedbed 2 Jack Snipe. A small group of 7 Turnstone and 16 Redshank were bizarrely feeding around the dry rack line, although I'm not entirely sure what they were feeding on as they were very flighty. Some decent Goldfinch flocks were milling around, whilst I also kicked out a few Meadow Pipit and Reed Bunting. 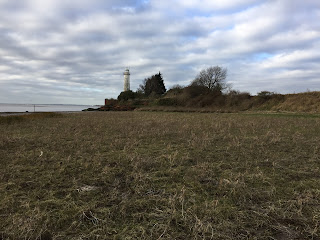 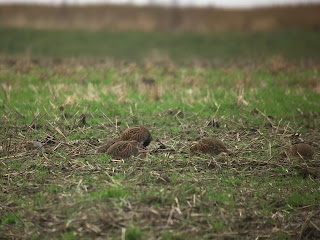 The walk back to the car was uneventful, but Grey Partridge were everywhere with upwards of c.24 birds scattered across the fields. A brief stop along Carr Lane to speak to a couple of other local birders (Derek and Steve) resulted in 2 Siskin flying over our heads and into Great Boar Wood, but very little else. I said my goodbyes and headed home, pleased with a fairly successful second day on patch of the year.