After a long week at work I decided to leave off a little earlier and head to the patch for some late afternoon birding, specifically to check out the Gulls (or potentially lack of, following the closure of Arpley Tip). It was a gorgeous winter afternoon with bright sunshine and a deep blue sky, which hid quite how cold it felt! 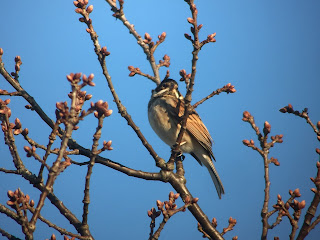 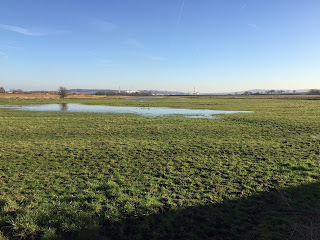 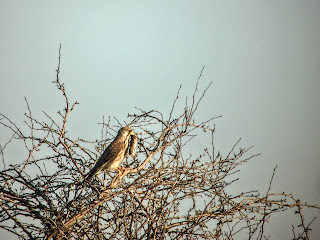 Stopping at Carr Lane there were a handful of Reed Bunting and Yellowhammer feeding along Ramsbrook. However the flooded field was devoid of life, and again there was no sign of the Cetti's Warbler (hopefully the cold spell hasn't killed it off). One of the local Kestrel had caught a mouse, and quickly dropped down to the floor where it spent a while demolishing it. The Pools were quiet with a few Redshank, Black-tailed Godwit, Lapwing, Eurasian Teal, Shoveler but little else. 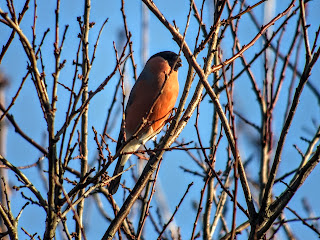 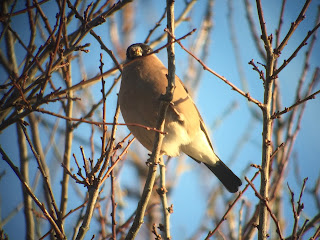 Parking up at the entrance to Pickerings Pasture I wandered along the track down to the Mersey, spending a while with c.9 Bullfinch that were on show, the males looking very gaudy in the late afternoon sunshine. A few Chaffinch and a small tit flock containing a few Goldcrest moved through whilst I watched the Bullfinch, but sadly no sign of the pale Chiffchaff that Rob had a few days earlier. 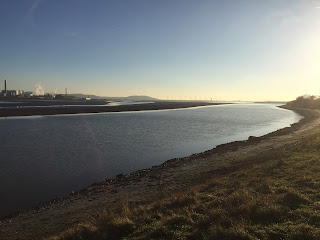 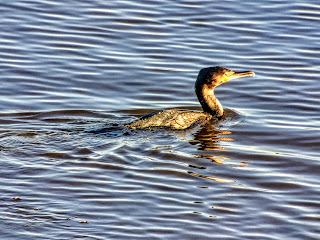 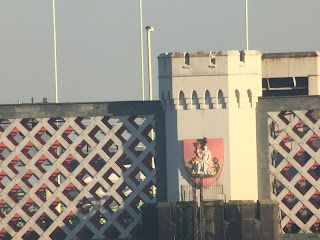 The tide was relatively low and still on it's way out, but there were good numbers of mixed waders and gulls present. Sadly despite a good grilling I didn't pick out anything of great interest, but there were again good numbers of Golden Plover, Lapwing, Dunlin with the odd Curlew, Oystercatcher, Redshank, Black-tailed Godwit thrown in for good measure. One of the local Peregrine was enjoying the afternoon sunshine on the Runcorn Bridge, whilst Cormorants seemed to be everywhere. Numbers of small gulls were good (but despite my best efforts I couldn't even pick out a Mediterranean), but "big" Gulls were again in short supply. 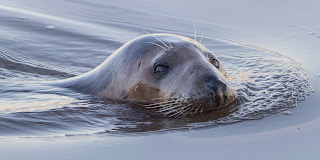 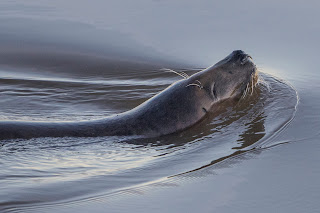 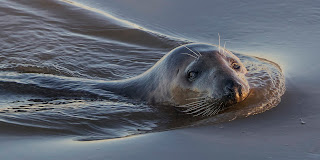 Scanning down towards the Hide I picked up the Grey Seal that had been seen for a while, but I somehow had failed to catch up with. It was actively feeding close to the shore during my visit, but being bone idle I couldn't be bothered to walk up to get closer views - thankfully Mike Roberts did and got some great shots (above). 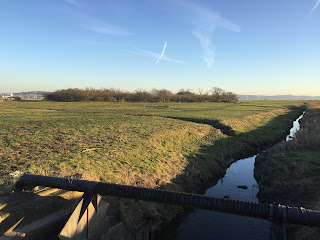 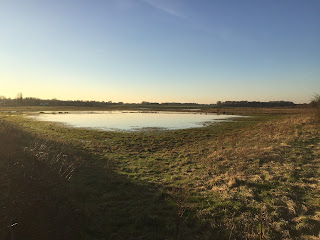 A brief stop at the bridge on Town Lane was a bit of a waste, with no sign of any Water Pipits again, and very little else. A single Little Egret was feeding in front of the decoy, whilst a small group of Eurasian Teal were sadly not hiding anything better. Even raptors seemed in short supply with only 2 Common Buzzard and a single Kestrel - where have all the Merlin gone?! 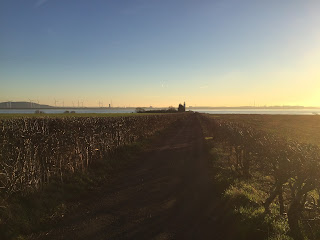 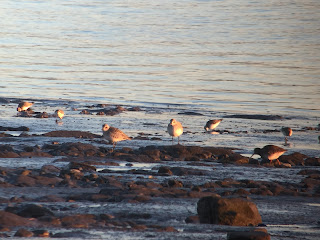 Heading round to Lighthouse Lane I was treated to some amazing late afternoon colours in the sky, even if the walk down to Hale Shore was quiet. The exposed mud held a good number of Grey Plover, Dunlin, Ringed Plover and Turnstone. Whilst a scan of Frodsham Score picked up a Marsh Harrier, stacks of Ravens, but surprisingly only a handful of Little Egret (and no Great White Egret?!). The Mersey was covered in small Gulls, but again the "big" Gulls seemed in short supply. However my attention was drawn to large numbers of Gulls heading in from the south-east (presumably from Gowy?) which sadly headed further west from my position. 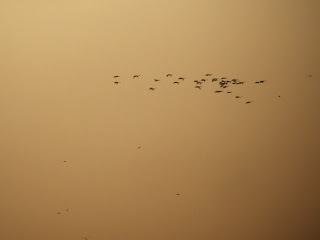 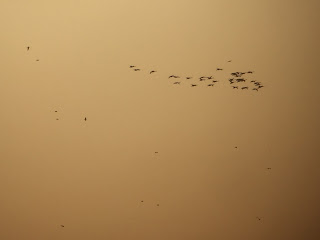 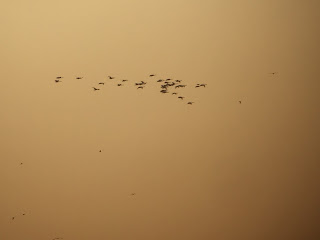 On the plus side I did pick up a large flock of Whooper Swan which also contained a single Bewick's Swan (almost certainly the group from Chelford that had departed west about 45 minutes earlier). As the sun started to drop further Gull numbers started to pick up, but were (in comparison to last year) still low, with only c.1500 moving west compared to 20-30,000 last year. I had almost given up when I suddenly picked up a monster of a 1st winter Glaucous Gull flying west. Although light was still okay for Scoping, any pics were a blurry mess; What's the difference? I hear you say! 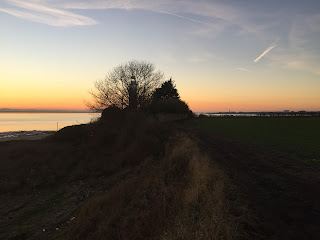 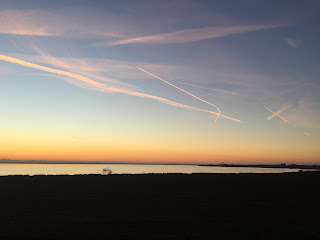 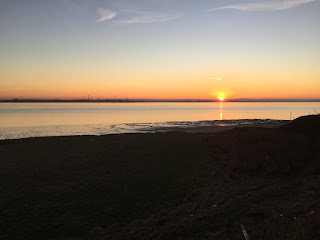 As the sun set below the hills I scanned further west and could see c.8-9000 large Gulls gathered on the exposed mud c.1 mile away - so possibly not all is lost for Gulling on the Mersey following the closure of Arpley Tip, although it may require a different strategy. It will be interesting to see whether a better tide may bring the birds closer to the Lighthouse again - we will wait and see. I made my way back to the car enjoying the sounds of calling Grey Partridge and singing Mistle Thrush (clearly the cold weather hasn't put them off just yet). 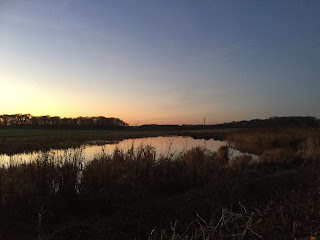 I called in briefly at Carr Lane on the way home, bumping into Sean O'Hara and Geoff Bond who were both waiting for the Owls to show up. At least 2 Water Rails were calling, but sadly I couldn't hang around for long, so despite the temptation of watching Owls again made me consider using the "held up in traffic" excuse I headed home.