With some pleasant Spring-like weather and news of a possible Grey Shrike sp. at Frodsham Marsh, I had thoughts of making the trip over the Mersey again. However the bird had done a bunk, so instead I decided to head to patch to see whether the Shrike had made the short journey across the river. The afternoon was a lot cooler, with the bright weather giving way to cloudier conditions and some light drizzle. 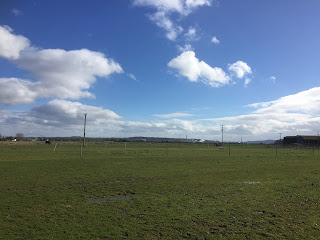 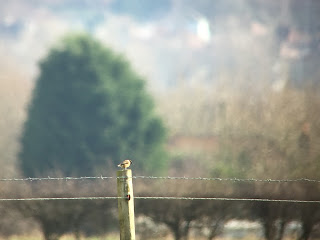 Stopping at Burnt Mill Farm I was pleased to find 2 Stonechat, which appear to be new birds into the area. A couple of Common Buzzard were mewing high up in the air, whilst I could hear a couple of Yellowhammer and Reed Bunting in the fields behind me. Good numbers of Meadow Pipit were constantly up and down from the stubble fields behind the paddocks, and with the bright sunshine it didn't feel as though it would be long until the first Wheatears appear. 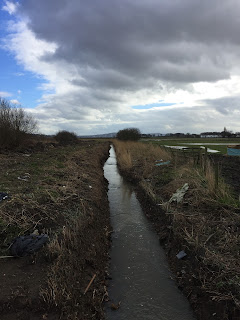 Moving down to the flooded pool on Carr Lane I was quickly brought down to earth, as the wind had picked up slightly and it felt decidedly cold (i.e. bloody freezing!). A group of c.200 Fieldfare flew over my head chacking away, and landed in the large copse. However other than good numbers of Moorhen and Coot the flood was quiet. Carr Lane Pools looked just as quiet with only a handful of Redshank and Eurasian Teal very little else. 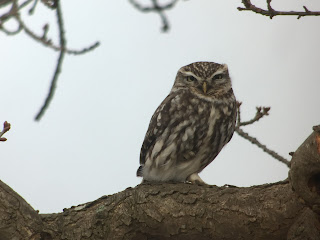 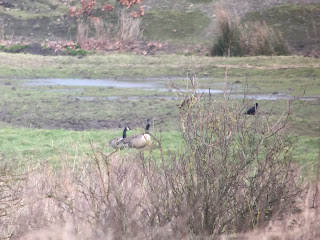 Parking up at the end of Within Way it was good to hear bubbling Nuthatch, and plenty of other birds in full song. As I was making my way along I got a phone call from Iggy to say that there was a female Merlin just below me. It initially was sat up before it went off chasing Linnets, and returning to a rather obscured position....doh! The Little Owl was again showing well in it's favoured tree, whilst two Raven flew over towards Lighthouse Lane cronking away. 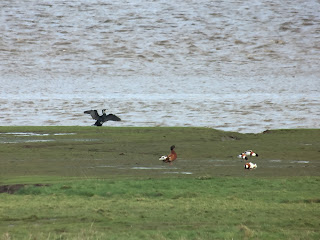 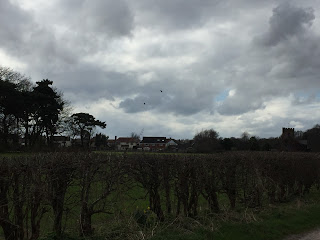 The "beast" (hybrid Ruddy x Common) was looking rather frisky, and was making amorous advances towards some of the Common Shelduck. The rest of Hale Marsh was relatively quiet, although there appeared to be good numbers of Wagtails and Pipits towards the hide at Pickerings Pasture....sadly a little too distant to do much with! I spent a little time scanning the hedges for the Shrike, but any hopes were soon dashed as the "possible" became a definite Great Grey Shrike, and a very smart one at that. 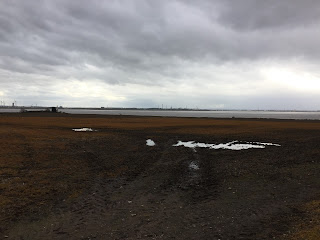 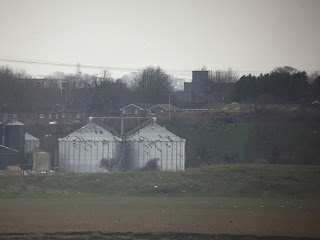 I resisted the temptation to dessert patch and instead headed to Church Lane to watch over the Mersey ahead of the incoming high tide; and it turned out to be an inspired choice. No sooner had I set up than I picked up a group of c.300 Pink-footed Geese flying in from the west, and even better the flock contained at least 2 Pale-bellied Brent Geese. The flock pitched down on Ince Marshes, but almost disappeared into the Marsh. However there were c.200 further Pink-footed Geese spread across the Marsh (and I'm fairly certain they contained other "Grey Geese" however they remained too distant to do much with). 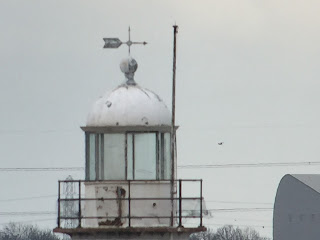 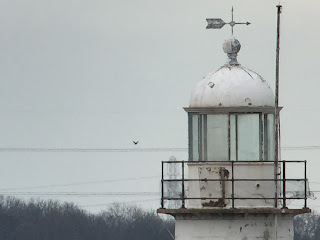 Ince Marsh and Frodsham Score were very productive with at least 3 Great White Egret, 18 Little Egret, 2 Mute Swan and an immature Whooper Swan spread across the length. A female/immature Marsh Harrier was hunting the back edge of Frodsham Score, whilst a Peregrine swept through causing chaos amongst the roosting waders. I was about to head off when I picked up a distant harrier approaching from the west of Ince Marshes, as it got closer I was delighted to see that it was a ringtail Hen Harrier. This is only my 3rd record in the last 3 years of a bird that is depressingly becoming a very rare sight along the Mersey. As the rain started to pelt down I decided to call it a day on the patch, and it certainly felt as though things were finally starting to get better on patch. Then again, roll on the Spring and the incoming migrants.