Bouncing with Sibes (sadly of the same species!!)

A day off work meant a chance to have a thorough search of the patch. It was a cool and clear start to the day, but the cloud soon crept in leaving a rather overcast day with drizzle appearing by mid-afternoon. The easterly wind swung between a light to moderate breeze throughout, and made it feel rather cold (a stark reminder that we are not far away from Winter). 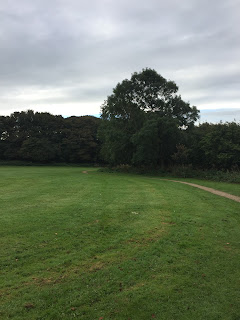 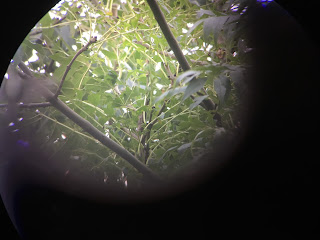 I decided to head straight for Hale Park, and within minutes was watching 2 Yellow-browed Warblers. Despite my best attempts I failed to get a single usable picture (that wasn't a leaf or a blur - as can be seen above!), fortunately Mike Roberts managed to get a few much better shots (below) of one of the birds before I arrived. There was still some good vizmig with flocks of Redwing, Skylark and Meadow Pipit moving through with the odd Siskin and Lesser Redpoll. The park was alive with the usual Tits, Nuthatch and Treecreeper, but Chiffchaff and a single female Blackcap were the only migrants I could dig out. 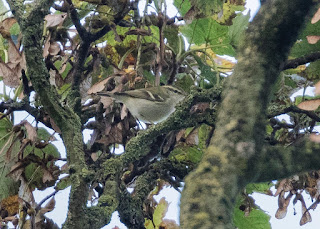 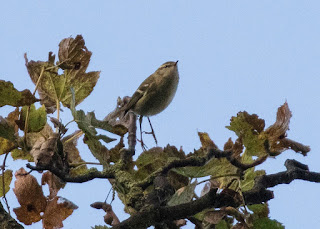 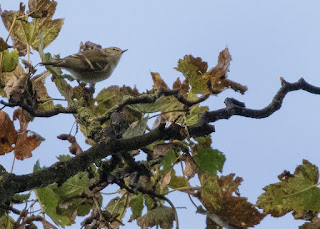 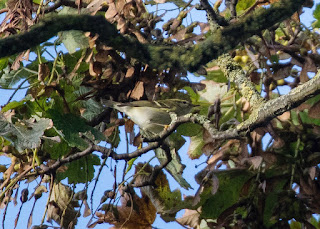 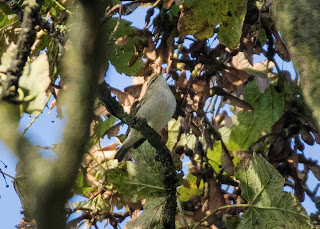 Continuing into the main part of Hale Park I picked up a few more tit flocks failing to find anything of great interest other than a few Goldcrest (including a few very grey-naped birds). Birds were still moving overhead and I picked up a few nasally Brambling heading south, among the Chaffinches. Deciding to work the rough fields seemed like a good idea, but only resulted in me getting soaking wet feet and jeans.....and no birds. I am still convinced that I will find something in this area. 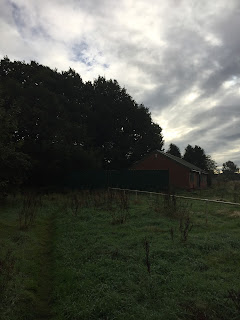 Returning along the north edge of the old football pitch I again checked the small flocks of 'crests and Tits, and eventually picked out a smart Firecrest. I walked back to the car via the outside of the main park and bumped into a number of birders looking without success for the Yellow-browed Warblers. Within a few minutes I had picked up the birds again, and managed to get everyone onto them (always a pleasure to see the excitement in peoples faces when they see a new bird). 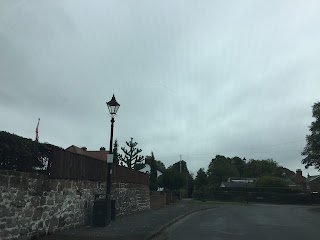 Driving round to Within Way a small group of Pink-footed Geese were flying over Church Lane. Parking up by the Childe statue, I could immediately hear a Yellow-browed Warbler calling above my head. I had good views as it fed in the Sycamore above my head among a mixed flock of Tits, which also contained a single Chiffchaff. Walking along Within Way produced plenty of overhead movement, but very few grounded birds. 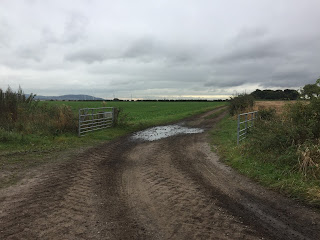 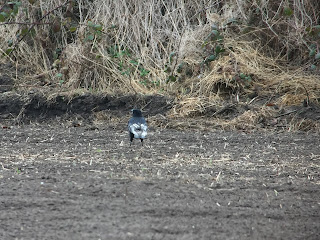 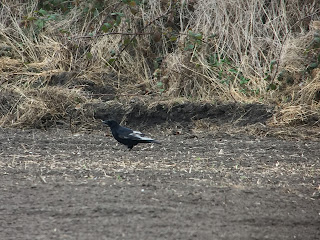 Meadow Pipit, Skylark, Redwing and the occasional Fieldfare, Grey Wagtail, Siskin and Lesser Redpoll were moving through. A Merlin zipped through chasing a few of the lower flying Meadow Pipit, and an occasional Common Buzzard floated through. Reaching the last patch of bushes at the bottom of Within Way, and yet another Yellow-browed Warbler was feeding along the hedgeline! My 4th of the day!! There seem to be a large number of partial leucistic Carrion Crow on patch this year (this is one of the less striking birds), it would be interesting to know whether they have all originated from a single brood? 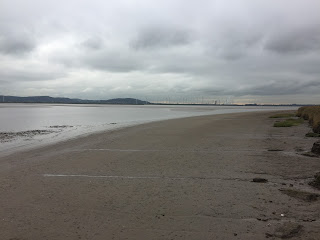 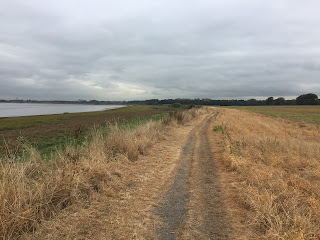 I continued to work the field edges and rough ground to the east of the Lighthouse with next to no results. A Chiffchaff in one of the copses, a few more Siskin and Lesser Redpoll the only real highlights. The potato field was being harvested, attracting shed loads of Black-headed Gulls and it was no real surprise to pick out a single adult Mediterranean Gull amongst them. 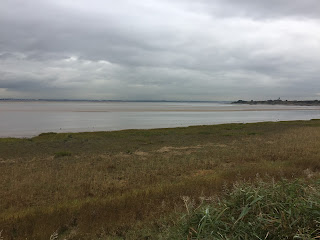 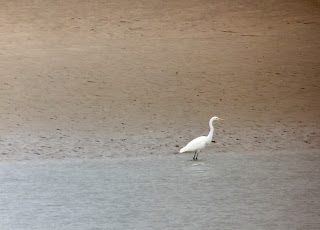 A Great White Egret was feeding west of the Lighthouse, and it made a nice change to actually get some good views of a bird that is now relatively common on patch. More surprising was a Guillemot that was actively feeding mid-channel in the Mersey (a patch year-tick and only my 2nd patch record). There were still good numbers of waders feeding out on the Mersey with a nice selection of Black-tailed Godwit, Grey Plover, Golden Plover, Dunlin and Redshank. Whilst over Frodsham Score there was a Marsh Harrier and good numbers of Raven. 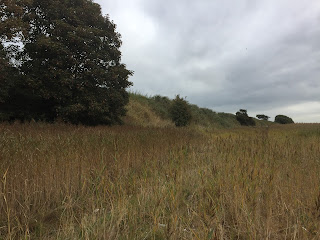 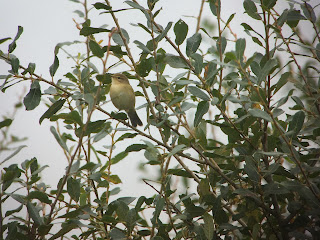 Continuing to work every bit of cover I managed to find a 5th Yellow-browed Warbler at the base of the cliff (off Hale Park) with a couple of Chiffchaff and Long-tailed Tit. Walking through the shore flushed out a few Common Snipe, Meadow Pipit, single Rock Pipit and a few Reed Bunting. A few more Brambling were moving through, with a larger group of 8 Lesser Redpoll. The ditches around the wooden bridge held a couple of Stonechat, but very little else. 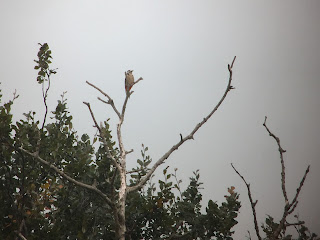 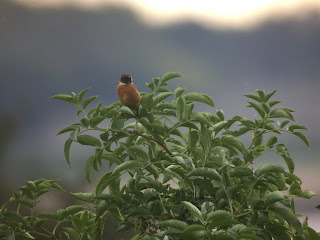 A Great spotted Woodpecker spiralled down from on high (a migrating bird?) and landed on one of the trees in Hale Park. I kicked out a few flocks of Linnets and Goldfinch, but very little to get the juices flowing. Walking back along Lighthouse Lane the light drizzle turned into more substantial rain, and birdlife seemed to drop off even more. The end garden held a few Goldcrest and a single Great spotted Woodpecker, whilst the ploughed fields were covered in Stock Doves, Woodpigeon, Collared Dove and Feral Pigeons. 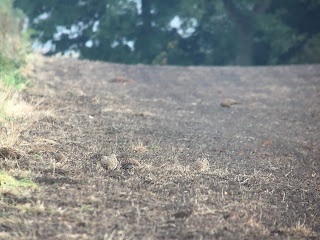 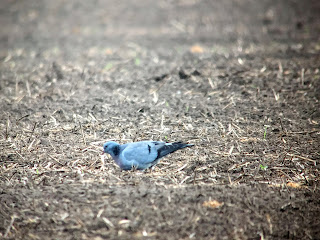 A more thorough scan picked up some decent sized coveys of Grey Partridge, with at least 36 counted around the edges. A sizable flock of 49 Skylark were feeding in the field, but despite a good grilling I couldn't pick out anything of greater interest. With time marching on, and starting to feel cold and tired I thought I would check along Carr Lane before heading home. 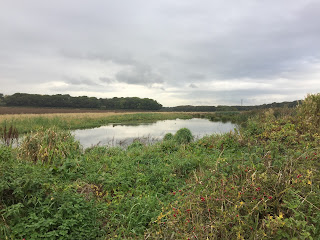 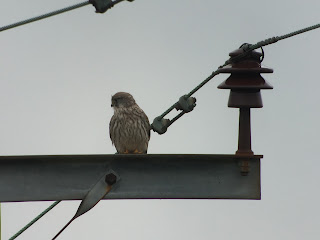 The flooded field held 3 Common Snipe (with at least another 4 birds flying around), 3 Black Tailed Godwit, 36 Eurasian Teal and a single Shoveler. A Kestrel was keeping a watchful eye over proceedings, and probably was the reason why there were next to no passerines around. A quick look over Carr Lane Pools picked up a good selection of ducks including 5 Pintail, but only 3 Redshank and 5 Black Tailed Godwit. The wires around the Pools held good numbers of Meadow Pipit and Linnet, but sadly very little else; it seemed like a good time to head home and get myself a well earned coffee!