It had been over 18 months since my last twitch and British lifer (the Derbyshire Red-throated Pipit) having been restricted to mostly patch birding due to family and work commitments. Not that I had really missed twitching (despite being stuck on 449 species!); I had fallen in love with patch birding over the last few years. That all changed on Thursday 13th October when news came out of a Siberian Accentor at Spurn, one of those near-mythical Sibes that dreams are made of.....but with work and family commitments I wasn't able to make it over until Sunday! Argghhh! 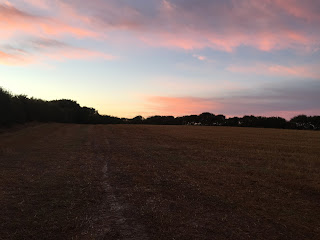 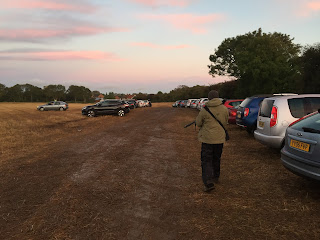 Fortunately it decided to stick around and went to roost on Saturday evening following it's usual pattern. I quickly made plans to pick up Iggy and head over to Spurn for first light. The drive over was painful, with clear skies prompting fears of an overnight departure. A Woodcock sat on the road was the only highlight of the drive over to Spurn. Reaching Easington we were greeted with news that the Accentor was still present (clearly my prayers had been answered). The hedges around the field held shed loads of Tree Sparrow, Fieldfare and Redwing, whilst Goldcrest seemed to be bouncing around everywhere. The short walk to the old school resulted in a brief snippet of Firecrest, Siskin and Lesser Redpolls moving over, but there was no waiting around! 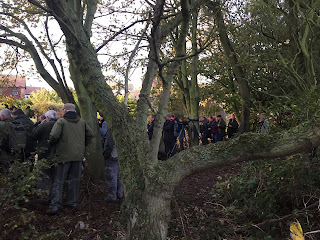 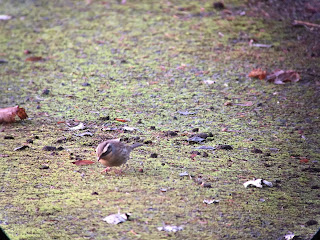 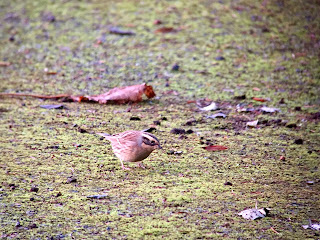 Fortunately there was no queue and I was able to join the viewing area straight away. I was amazed to see the Siberian Accentor straight away, and not a distant dot but mooching around no more than 10 meters away! WOW! WHAT. A. BIRD! What else can I say? I took some quick shaky pics, but mostly enjoyed just watching the bird feeding away through the scope, catching a few snippets of quiet "Dunnock-like" chattering. Having composed myself and returned my jaw to my upper mandible  I took time to get some more pics. 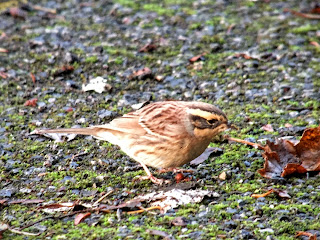 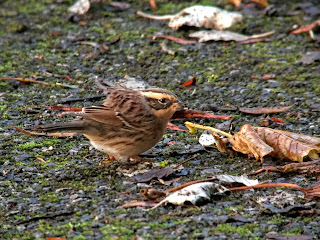 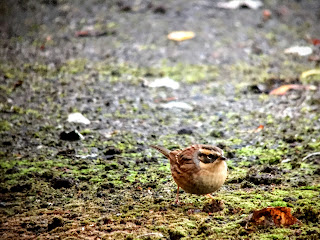 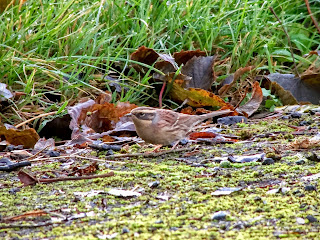 I was amazed at how confiding it was, but mostly I just couldn't stop smiling. My 450th British species, and what a way to bring it up. Aside from the Siberian Accentor the whole area was swarming with Goldcrest, 3-4 Chiffchaff whilst Siskin, Lesser Redpoll and Brambling were constantly moving overhead. Having spent about an hour with the Accentor we decided to head down towards the Crown and Anchor and catch up with some of the other Scarcities that were about. 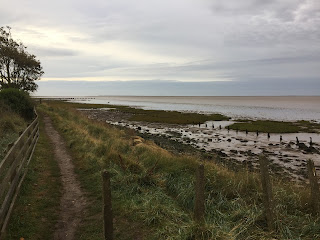 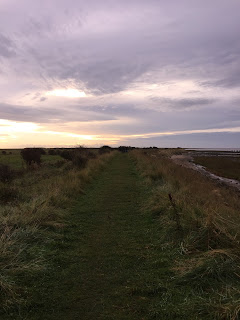 We arrived just at the right time as the Radde's Warbler had just been reported at the north end of the Canal Zone. Parking up we wandered around, kicking up a few Robins and Goldcrest from beneath our feet! Brent Geese and a fine selection of waders were feeding on the Humber as we reached the huddle of birders staring at the bushes where the Radde's Warbler had last been seen. Almost immediately the Radde's Warbler started to call in front of us, and I quickly picked it up working along the hedge/grass line. We got some superb views, and it was great to listen to the call (in person) again - a softer "tchak" compared to the rather harsh "tak" of Dusky. 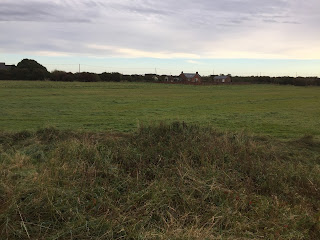 A familiar "ping" from above us alerted us to 3 Bearded Tit flying high south, always great to see post-breeding birds dispersing. We decided to carry on and do a loop around the Canal Zone and head to the Blue Bell Café. The whole area was swarming with Goldcrests, Meadow Pipits and Robins and a mix of Thrushes moving over, but sadly we couldn't find anything rarer. As we walked towards the Blue Bell the first rain started to pelt down, but we decided to head on and have a look at the Shorelark that had taken up residence. 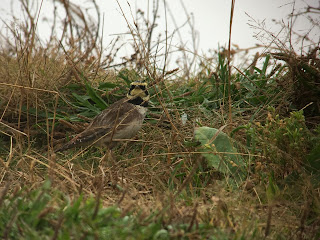 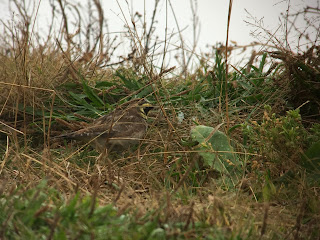 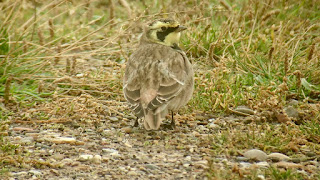 Although I used to see Shorelark regularly in Suffolk, I haven't seen one for a number of years. I had forgotten how smart they are! It was remarkably confiding and allowed some nice pics (for me). The rain was really starting to pelt it down now as we headed back towards the Crown and Anchor. We decided to shelter in Kilnsea Churchyard, hopeful that something decent may think the same. After a long birdless wait (other than a few wet and windblown Blackcap and Chiffchaff) we decided to just get wet and wandered round to the car park at the Crown and Anchor. After a short wait I picked up a very smart Mealy Redpoll among a group of Siskin. Getting Iggy onto the bird as small Phyllosc flew into the same bush....a Pallas's Warbler. We managed to get the small group of birders onto it before it flew into the roadside hedge. Again, this was my first Pallas's since I moved back to Liverpool - what cracking little birds! 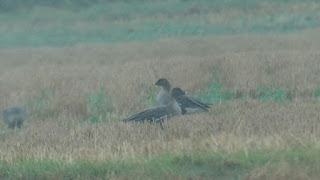 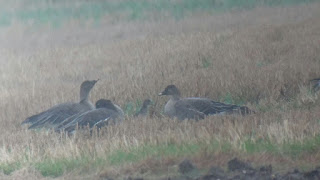 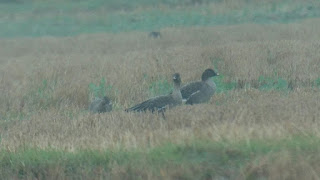 As we were totally drenched we decided to have a quick look for the Tundra Bean Geese that were north of Kilnsea Wetland. Despite a few blank looking faces in the car park, we quickly located them in the field from the road. There was no sign of any Taiga , despite news services reporting to the contrary?! The fields were full of Golden Plover, Starling and Thrushes, whilst Meadow Pipits and Skylark bounced around in the rain. Returning to the car we stumbled across a stunning male Redstart sat on the fenceposts, whilst a few Chiffchaff were hopping around looking rather bedraggled. 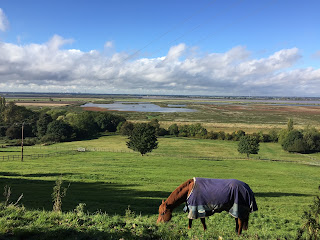 With rain forecast well into the afternoon we (well I) decided to head to Alkborough to try and catch up with the Western Purple Swamphen (I had so far resisted the urge to head over for the plastic purple chicken!!). By the time we arrived the rain had cleared and left behind a beautiful bright sunny afternoon. What a cracking little reserve this is! Cetti's Warbler and Bearded Tits were calling from the reedbeds, whilst at least 5 Marsh Harrier were quartering the same area. 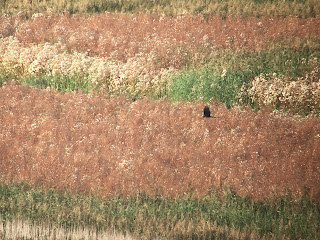 We spent he next couple of hours scanning the edges of the Pools without success, but enjoyed a really good selection of waders including Avocets, 2 Greenshank, 2 Green Sandpiper, 7 Ruff, Spotted Redshank, 60+ Common Snipe and plenty of Dunlin, Redshank, Black Tailed Godwit. A Great Spotted Woodpecker and Nuthatch joined a few typical woodland birds, and a single Chiffchaff crept through behind our position. Time was marching on, and we decided to call it quits and head back to Liverpool....too soon by the sounds as the Swampdonkey was reported about 30 minutes after we left! Ah well, one to pop back for next week when I'm back in the area.......if I can really be bothered?!

A great days birding, and it felt amazing to be back on the east coast. The number of common passerines and migrants reminded me just what I had left behind when I moved to Liverpool. Then again it makes visits back to places like Spurn even more magical. I'm just hoping that the (surely) imminent Hawk Owl turns up whilst the birding is still so good..........