A week of good easterlies and some impressive vizmig counts at Hale Head by Rob and Jeff, had me making plans for an early start today. I was clearly far too excited as I arrived on Carr Lane in near darkness. It was fairly chilly, but clouds seemed to be breaking from the east and there was only a light ESE wind, which would hopefully make it ideal for a spot of vizmig. 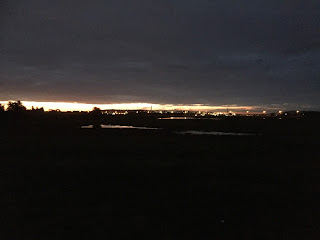 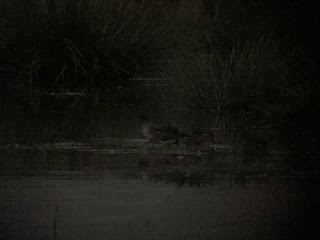 I stopped at the flooded field on Carr Lane and was surprised at how good the area looked again, clearly some of the water had drained off. There were at least 84 Eurasian Teal spread across the pools, whilst there were Common Snipe constantly squelching overhead. A scan with the scope eventually picked up a Green Sandpiper that I could hear calling before it was light enough to see. 2 Water Rail were squealing from the reeds, and a further scan revealed a bobbing Jack Snipe near the back edge. Sadly (as you'll see from the attempted photo of the Green Sandpiper above, it was a little too dark for any real pics!). 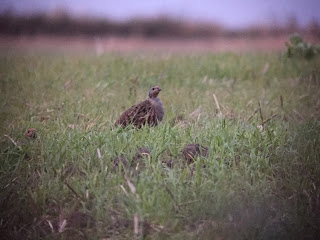 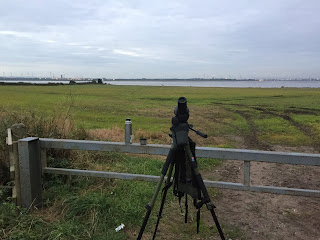 I moved round to Church Lane, and was pleased to find a covey of at least 19 Grey Partridge by the metal gate which provided good views. I had barely had chance to put the scope up and pour a coffee when I heard a familiar call (a regular sound from my winter birding in Suffolk), looking up I was greeted by the sight of 12 White-fronted Geese flying south. They continued onwards towards Frodsham Score and beyond, a great start. 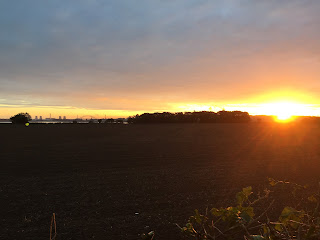 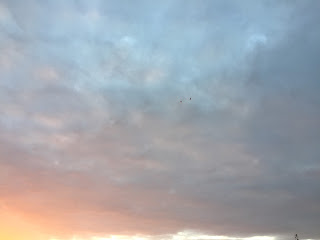 I was joined by Rob Cockbain and Jeff Clark for the next three hours which produced some great vizmig. 2 Great White Egret moving west over our heads were a good start, and looked stunning in the early morning light. Amongst the smaller passerines the highlights were a single Hawfinch (only my 2nd patch record, but the 3rd of the week for Rob and Jeff), 24 Siskin, 5 Lesser Redpoll and 17 Tree Sparrow. However the real highlight were the Thrushes moving with 5880 Redwing (including one monster flock of 720), 44 Fieldfare (my first of the winter) and 31 Song Thrush. A full breakdown is available on Trektellen. 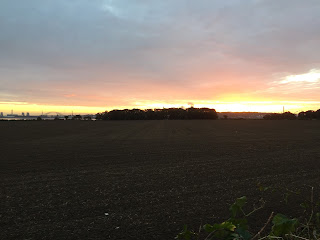 The other major spectacle were the constant groups of Pink-footed Geese on the move, with us counting 1069 moving East (presumably birds pushed too far west by the strong winds and then relocating?). The end garden of Church Lane was producing a number of Goldcrest and Chiffchaffs, whilst tit flocks were moving through fairly regularly. A Merlin shot past, narrowly avoiding Jeff's head, whilst a Sparrowhawk and a single Common Buzzard also put in an appearance. The main movement of birds had started to die off by 10am, so I decided to head off to check a few other areas of the patch. 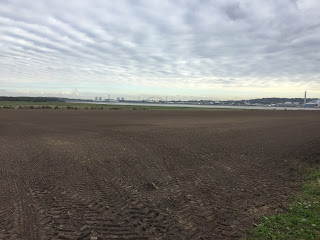 Walking down Within Way was fairly unproductive with only a few Meadow Pipit and Skylark on the move, and next to no other passerines in the fields. Hale Marsh held the Egyptian Goose, presumably on a brief trip away from Carr Lane Pools. Returning towards the farm, I was pleased to see a number of Thrushes on the move again with plenty of Redwing and Mistle Thrush feeding on the berries along the hedges. 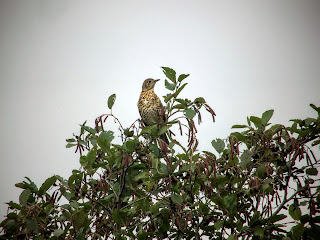 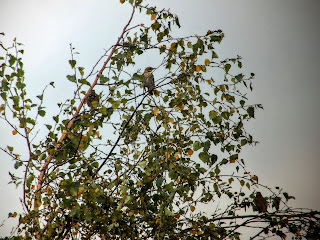 A small group of Long-tailed Tit, Blue Tit and Great Tit were moving through the line of trees on the perimeter of the farm, and on closer inspection I found a Yellow-browed Warbler (at least my 3rd bird of the week!). It was another mobile bird, and really didn't play ball with letting me to try and get some pics. The flock also contained 3+ Chiffchaff, 2 Blackcap and about 5 Goldcrest, and I wouldn't be surprised if I had overlooked something. 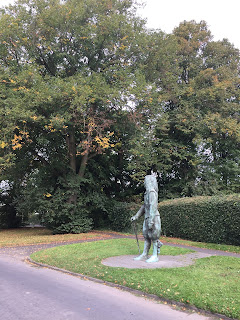 Leaving the Yellow-browed Warbler by the Farm I returned to the car enjoying seeing a family party of Nuthatch. I was just about to get into the car when I heard another Yellow-browed Warbler from the large trees by the Childe of Hale! Madness, it really makes me wonder how many birds are in the area at the moment as they seem to be in virtually every Tit flock! 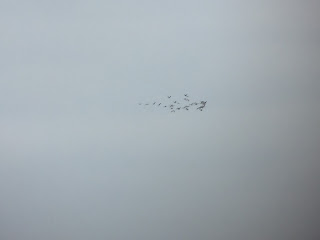 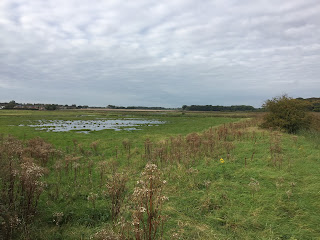 Town Lane was exceedingly quiet with no waders present, and only a smattering of Eurasian Teal, Mallard and Shoveler. A small group of c.49 Pink-footed Geese flew over calling, whilst one of the local Kingfishers was calling from Ramsbrook. A Peregrine was flying around over the blue topped tower, but there was very little to get the enthusiasm going. 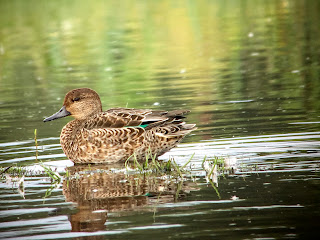 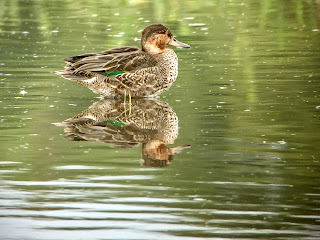 The flooded field on Carr Lane was full of ducks again, but sadly the Jack Snipe and Green Sandpiper were nowhere to be seen. Scanning back across Carr Lane revealed a huge number of ducks with at least 6 Pintail, 38 Wigeon and 150 Eurasian Teal. A single Redshank was the only wader present, maybe the chance of any last minute waders has gone..... With my available time running out I headed home.

So two new patch year ticks today takes me to 182, and ahead of my total for 2015. Considering that last year was seen as exceptional, I'm not sure what to say about this year....and there is still plenty of time left!