Day two of my annual leave and it was back on patch; I clearly need to get my head examined as I probably should have just jumped on the M62 and headed for Spurn! At least the weather was a bit better to start with, with gorgeous autumnal sunshine and bright blue skies. However the clouds were not far away, and by midday it had turned decidedly cloudy, grey and murky with an increasingly bitter cold wind. 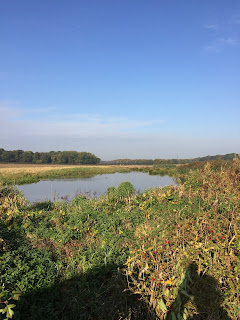 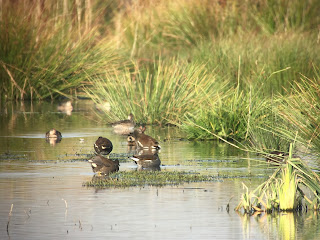 The flooded field on Carr Lane was full of Moorhen (a minimum of 23 birds!) and Eurasian Teal, whilst a single Black Tailed Godwit was looking a little lonely. A stunning male Sparrowhawk came gliding in and caused panic amongst everything, and did it's best Chanting Goshawk impression before dropping down into the edge of the pool. A Kingfisher was calling from Ramsbrook, but sadly remained out of view. 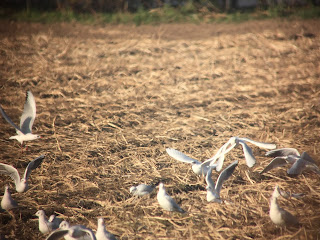 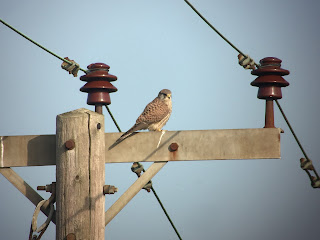 The field next to the flood was being ploughed, and had attracted c.400 Black Headed Gulls. A bit of scanning resulted in at least 3 adult Mediterranean Gulls amongst them. A Kestrel was sat on the wires above, looking a little bemused by all of the gull madness. A few Meadow Pipit, Linnets and Reed Bunting were moving about, but it again felt very quiet. 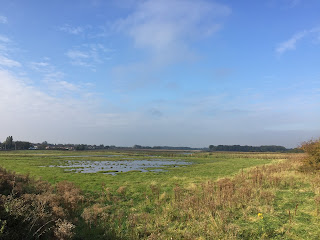 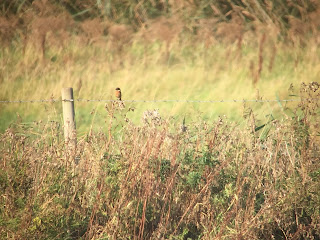 Moving round to the bridge on Town Lane I quickly picked up 3 Stonechat in the area, a slight decrease from yesterday. The flooded field was remarkably quiet with only a handful of Eurasian Teal. A Great White Egret flew from near the road across Hale Marsh and appeared to land, but I couldn't relocate it. A Peregrine was zooming around the decoy causing the local Stock Doves and Woodpigeons to have a nervous break down. There were next to no passerines moving about on the Marsh today, but a few Grey Wagtail and Pied Wagtails were feeding on the area in front of the decoy. 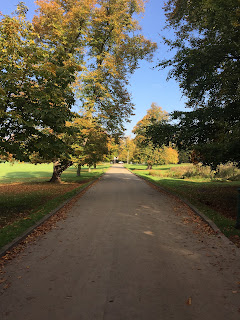 I decided to move round to Hale Park and complete a loop of the western section of the patch. It was still a lovely autumnal day, and the trees are really starting to look stunning. Sadly the birds were not there to match, with only a few Nuthatch, Treecreeper, Goldcrest and the odd small Tit flock. The rough fields and the area around the football pitch were just as quiet, a single Siskin and Brambling providing the only slight distraction. 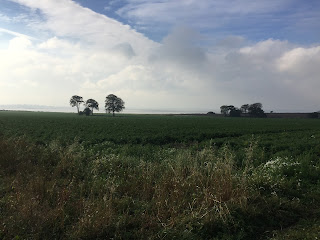 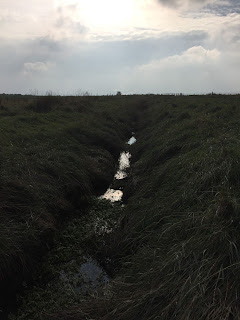 I had a good stomp around the carrot fields and the ditch down to the Mersey, but only managed to kick out a handful of Meadow Pipits. I couldn't quite believe how quiet it was, and was really starting to regret having wasted a days leave. I decided to walk back up to the Lighthouse and walk the entire shore....bad idea, I just ended up getting more frustrated by the lack of birds. A single Rock Pipit, 2 Common Snipe, Stonechat and 4 Meadow Pipit proved to be the best of anything. 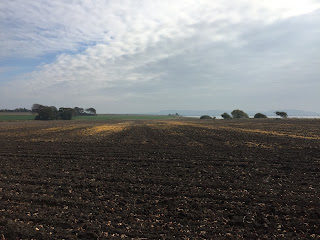 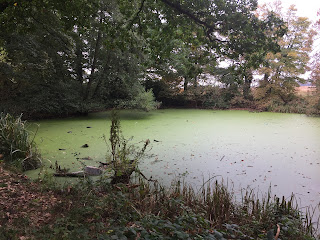 Heading back into Hale Park I came across 2 singing Treecreeper, clearly under the impression that it was March and not October! A couple of Lesser Redpoll were in the weedy field on the north side of the park, but other than a few Goldcrest it was eerily quiet. As I was nearing Hale Hall I finally came across a decent flock of birds. 5 Nuthatch, 6 Treecreeper and a Great Spotted Woodpecker were fun to watch at close range. Masses of Long Tailed, Blue, Great Tit and Goldcrest were moving through the treetops, and eventually the neck breaking scanning produced a Yellow-browed Warbler. 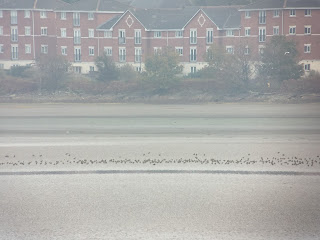 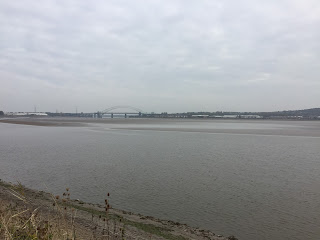 With the wind picking up and weather starting to close in a little I decided to try my luck at Pickerings Pasture. A split flock of c.800 Golden Plover was great to see, but far too distant to look at properly. There were good numbers of waders on no mans land, but with the murk it was near impossible to look through them properly; c.150 Curlew, c.300 Black Tailed Godwit, c.80 Oystercatcher. c.100 Redshank and c.400 Dunlin - although there could well have been anything hiding amongst them! Maybe I need to borrow the Hubble......

I spent a further hour kicking around the back of Pickerings with next to nothing. The rubble piles still look like they should produce a Black Redstart and the brambles thickets still look perfect for a Dusky Warbler.....then again maybe I'm still in East Coast mode?! After a good start to the month October seems to be fizzling out a little.