Having gone through the highs and lows of whether the Dusky Thrush in Beeley would stay long enough for me to get over, I finally managed to get over on Tuesday - where have the days of care free twitching gone?! The early pattern of the Thrush regularly feeding in the Orchards appeared to have subsided, and recent reports had all originated from the Pig Lane area. A midweek twitch of a relatively long staying rarity, I was hopeful that there would be enough people still present to make sure the area got enough coverage. 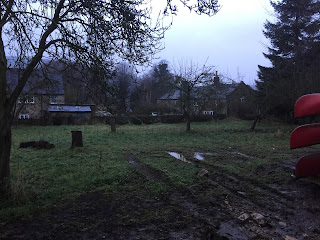 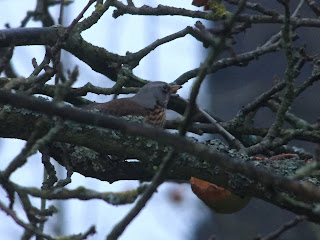 Arriving at first light I parked up in Dukes Barn and got my bearings of where the main spots were to view the bird (just in preparation of any mad dashes!). I spent a while at the orchard behind the barn where a few Brambling and Siskin were moving over, but Thrushes were in short supply with only a few Fieldfare and Blackbird. With little moving I moved to the bigger orchard where I admired the newly rebuilt drystone wall (although the noise of it being repaired probably was putting off many of the Thrushes from coming down to feed). Saying that there were still good numbers of Fieldfare and Blackbird....but still no Dusky Thrush. 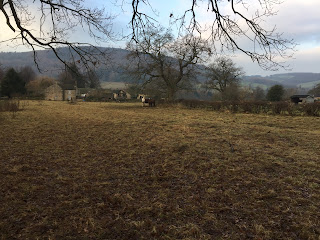 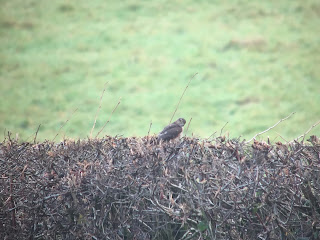 Returning to the Barn I walked the climbing area and surrounding fencing, noticing some good numbers of Thrushes coming down into the field (just off Pig Lane). Walking through the horse field, I approached the field and was amazed by the number of thrushes. After about 30 minutes of scanning through stacks of Redwing, Fieldfare and Blackbird I suddenly scanned straight onto the DUSKY THRUSH, probably at about 30 meter range. After a few expletives and as I fumbled to get my phone out the whole Thrush flock flew up into the tree. I was joined by another birder and we scanned the Thrushes as the slowly flew down onto the field again. Seconds later the whole flock (c.400 Redwing and c.50 Fieldfare) got up and flew further along Pig Lane. We could hear the Dusky Thrush calling as it flew away but sadly I wasn't able to pick it up in flight. An immature male Sparrowhawk appeared to be the cause of the Thrush flush, and spent a couple of minutes feeding along the hedgerow.

I spent the next 4 hours with c.40 other birders chasing around Pig Lane as various shouts went up. The increasingly skittish and broken up flocks of thrushes moving around making it near impossible to pin the Dusky down for any length of time. I finally achieved 2 more views, but again frustratingly brief and not long enough for any pics (and partly concerned that I would kill my phone battery and end up with no SatNav!). With my available time running out, I had to head home (even worse as I believe that the Thrush showed better just after I left). Although I was happy to at least get tickable views, I will want to return (if it sticks) for second helpings.