Despite the blue skies and bright sunshine it was proper brass monkeys this morning. When I first arrived at shortly before 6am the temperature gauge was indicating 3 degrees, and it hadn't reached double figures by the time I left. The strong north-westerly made it feel even colder; a direct contrast to the last weeks warm weather. 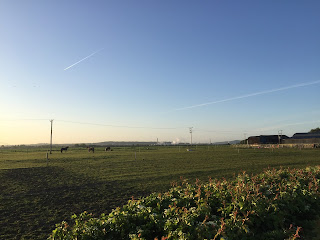 The paddocks around Burnt Mill Farm held a single singing Corn Bunting, a few Stock Dove and Grey Partridge, but little else. A Sparrowhawk flapped lazily over, looking as bleary eyed as I felt. The wires on the drive down Carr Lane held a number of Linnet, Goldfinch and Reed Bunting, whilst I could hear Whitethroat singing away from the hedgerows. 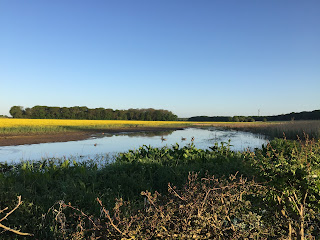 The flooded fields and Ramsbrook were quiet with only a couple of Lapwing, Mallard and Coot families. The reeds were full of the sounds of Reed Warbler and Sedge Warbler, whilst a single Yellow Wagtail flew over towards Carr Lane Pools. Great Boar Wood was full of the songs of Blackcap and Chiffchaff, but there seemed to be a lack of other passerines to keep the interest up. 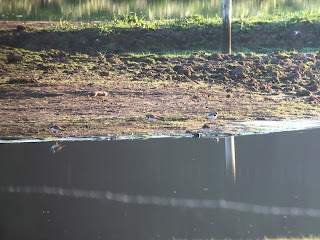 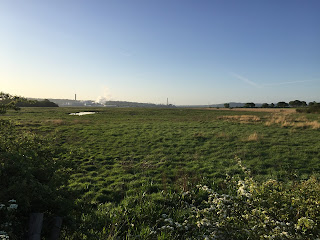 Carr Lane Pools was equally quiet with just 5 Ringed Plover providing any real interest. Hale Marsh wasn't much better with no waders making use of the enticing looking pools. A single Little Egret was stalking the margins of one of the distant pools, and a male Whinchat was sat on the fenceline on the west edge of the marsh, but remained distant at all times. 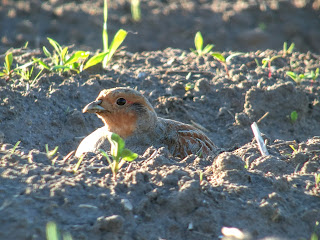 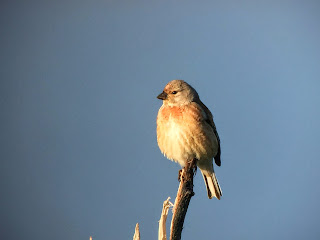 Deciding to head down to Hale Shore to coincide with the dropping high tide. The fields on Lighthouse Lane held at least 12 Grey Partridge, including a couple of quite showy birds. The hedges were full of Linnet and Whitethroat, but there was still a lack of any migrants. Reaching the Lighthouse I scanned west towards Garston and was delighted to pick up 2 Common Tern (a difficult bird on patch, along with the rest of the terns!) fishing just off from the Airport Tower. 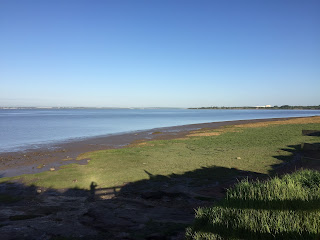 At least 3 singing Corn Bunting were singing along the Shore area, the highest count in this section of the patch for a number of years. There were very few waders to the west of the Lighthouse (a single Whimbrel and 2 Ringed Plover), but fortunately there was a much better gathering about 200m east of the Lighthouse. Shortly after setting up I was joined by Rob Cockbain, and we spent the next hour or two grilling the waders. 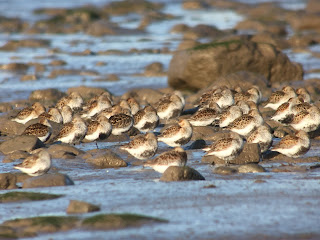 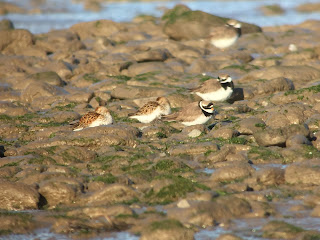 There was a decent sized group of Dunlin and Ringed Plovers. But despite much searching there was no sign of either the Broad Billed Sandpiper or White Rumped Sandpiper. The best that we could produce were 2 Sanderling (in near summer plumage), but numbers were clearly down on the last 2 days with only 436 Dunlin and 89 Ringed Plover. Despite this it was still great fun looking through the variety of Dunlin (although the arctica numbers compared to Thursday were again much reduced). 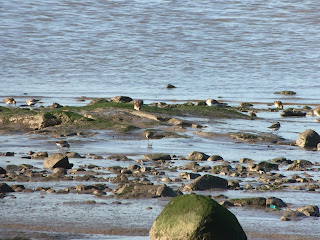 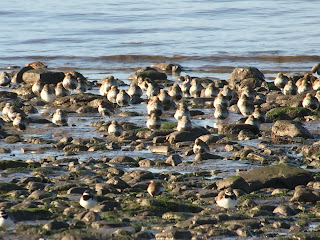 I did allow myself a few scans of the Mersey and Frodsham Score between watching the Dunlin, and I picked up a female Common Scoter which flew in from the west, made a few circles and then finally ditched on the Frodsham side. A female Marsh Harrier was hunting the Score, whilst a couple of Whimbrel flew through. 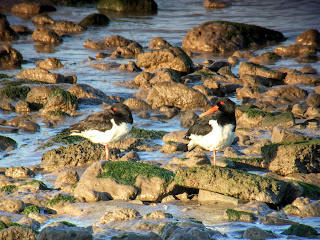 With very few waders on the move, and no "new" groups joining the main flock I decided to call it a day. A couple of stops on the way home, at the flooded fields and Burnt Mill Farm, failed to locate anything of great interest. Maybe these winds aren't actually helping.....unless you are lucky enough to live on the east coast!!

Not on patch, but I had an enjoyable trip up to Crosby and Seaforth later in the morning, finding a smart 1st Summer Caspian Gull, whilst also catching up with a nice selection of Terns (including Black, Arctic, Little, Sandwich and Common). Oh, to have that selection of terns on patch.....I can but dream!!