After a week of no patch birding I had developed severe withdrawal symptoms; despite being tied up with DIY duties at home (never a good time of year!) I managed to get a few hours out on patch today. After some heavy rain showers, slightly brighter conditions had developed and it had left a rather muggy afternoon. By the time I reached Carr Lane though it was hammering it down with rain again, fortunately it didn't last too long. 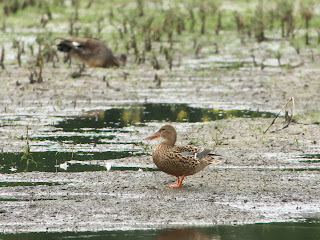 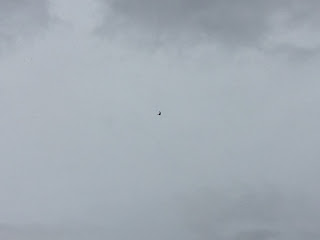 The flooded field was full of ducks including many ducklings - 4 Shoveler, 7 Gadwall, 12 Mallard (with 15 duckling) and a male Teal. A Hobby shot over towards the farm on Town Lane (yes, that's the dot in the blue sky!). The reeds were full of singing Sedge and Reed Warbler, whilst the hedges and edges of Great Boar Wood seemed alive with the songs of Whitethroat, Blackcap, Willow Warbler and Chiffchaff. 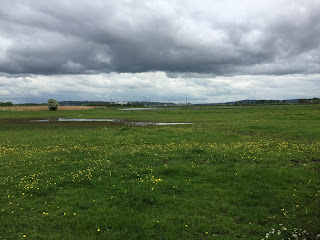 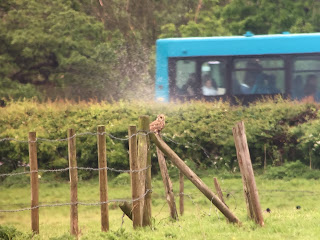 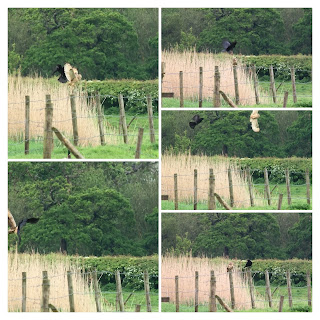 Scanning over towards Carr Lane Pools I noticed at least 14 Tufted Duck feeding on the pools, the first to make it onto the pools this year. Out of the corner of my eye I saw a bit of commotion, with a Carrion Crow and a number of small passerines mobbing something sat on the posts. I was surprised to find it was a smart Short Eared Owl. It rarely got a minutes piece throughout its stay with pretty much every bird having a go at it at some point. 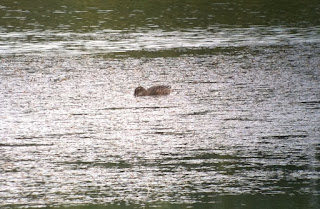 Another quick look on the flooded fields resulted in a female Garganey feeding out in the open. It quickly decided that it was far too exposed and returned to the reedy section again. Although a regular summer visitor on patch, this was surprisingly the first on patch this year, hopefully still time for more to come in. 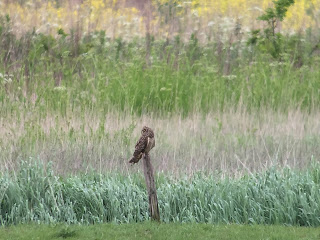 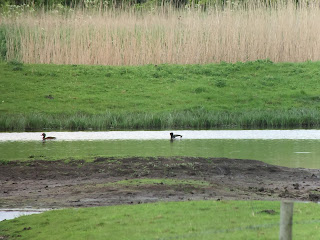 Moving round to Town Lane (having got eaten alive along Carr Lane by the increasing number of mosquitos and midges) the Short Eared Owl was still performing whilst the Tufted Ducks were the only birds of note on the Pools. The wet field to the east of the main pools continue to look good and held 15 Ringed Plover and a single Little Ringed Plover, but very little else. 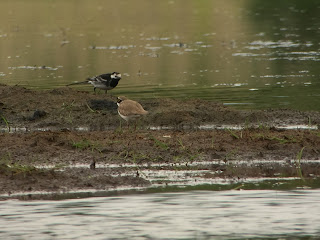 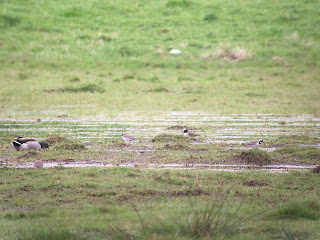 Hale Marsh was quiet except for a single Little Egret and the masses of Canada Geese. The Cormorants on the decoy seem to be doing well, with many appearing to be incubating. The moat around the decoy also held 9 Tufted Duck, clearly an influx into the Pools over the last week. Walking back to the car the Short Eared Owl had finally had enough as it headed over the road to Hale Marsh (with a  Lapwing and a Shelduck in pursuit). 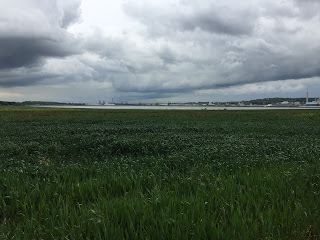 Within Way was relatively quiet with just the expected Goldfinch, Linnets, Skylark and Meadow Pipit. A single Yellow Wagtail flew over calling, and was pretty much the only highlight until I reached the Oilseed Rape field. At least 2 Quail were singing, albeit distantly in the field.....less surprising was that they didn't show! With my available time running out I decided to head back to the car. 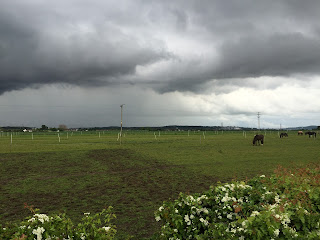 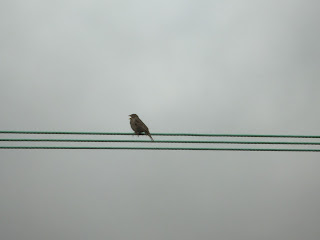