An early morning visit to the patch, with high expectations of migrants and waders galore. A beautifully clear bright morning, but a lot cooler with a brisk northerly wind. The change in temperature was noticeable from yesterday's weather, and it felt a lot more like autumn. 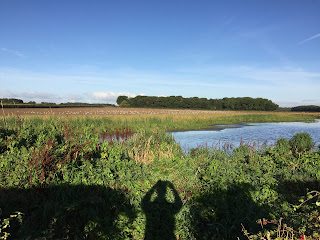 The flooded field along Carr Lane was my first port of call as per usual. 5 Black Tailed Godwit were feeding at the back of the pool, and there were a good number of Eurasian Teal roosting among the edges. A single Snipe was hiding amongst the thinker rushes, whilst a few Coot and Moorhen were also mooching about. A Nuthatch and Great Spotted Woodpecker were calling from Great Boar Wood, whilst a Sparrowhawk and Kestrel were circling over the wood. There was a good gathering of Black Headed Gulls feeding on the ploughed section of the field, but despite a fairly thorough look I couldn't find anything more interesting than a single Common Gull. 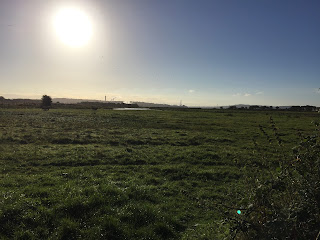 The sun was remarkably bright and made viewing Carr Lane Pools difficult. However there were 3 Ruff feeding at the near edge, and there were good numbers of Eurasian Teal, Shoveler and Mallard. A Common Buzzard was drifting around the ploughed field, and a further Kestrel was sat on the fenceposts. However the light was dreadful, so decided not to waste any more time and head round to Town Lane. 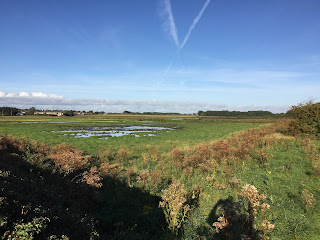 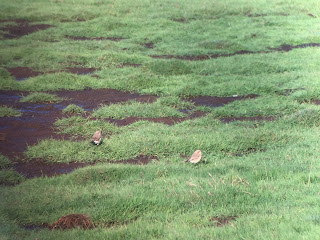 Parking on the bridge on Town Lane it was evident that there had been a big clearout of waders with only 5 Ruff, 3 Black tailed Godwit and c.9 Common Snipe remaining. A few Eurasian Teal were feeding on the muddy fringes, but there was no sign of the Egyptian Goose again. The fenceposts were remarkably quiet, but I picked up 2 Northern Wheatear feeding along the edge of the muddy area. A couple of visiting birders had found a small wader on the main pools, but it had gone missing so I moved round to the gate on Town Lane to see whether I could pick it out. 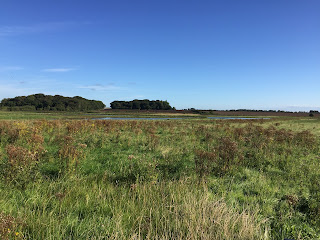 A quick scan revealed 5 Ruff, 2 Black Tailed Godwit and a good selection of ducks (Wigeon, Eurasian Teal, Gadwall and Shoveler). There was no sign of any other waders, other than a few Common Snipe hiding at the back of the Pools, but with vegetation still quite high in front of the Pools and the islands anything could potentially be lurking in there. 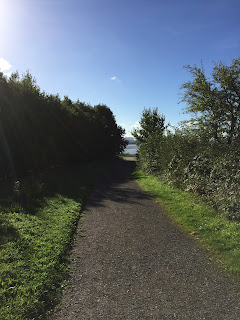 I moved round to Pickerings Pasture, where I stumbled across a female Common Redstart straight along the hedge by the car park. There were a number of Chiffchaff, and I felt hopeful that there may be a few more migrants around. I had a quick look on the Mersey, but the light was horrific with the bright sun and increasing heat haze making viewing very hard. 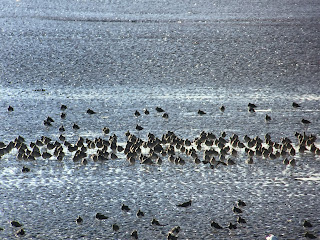 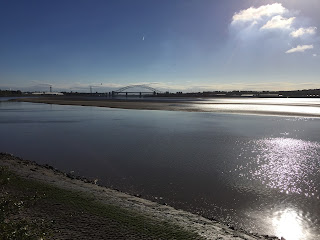 However, I did pick up 38 Golden Plover, 4 Knot, 350+ Black Tailed Godwit in the close flock, whilst there was a decent spread of smaller waders further out (c.1500 presumed Dunlin/Ringed Plovers). With the odd hueet of Chiffchaff coming from behind me, I decided to spend the rest of my time looking for migrants along the river wall and industrial area behind. 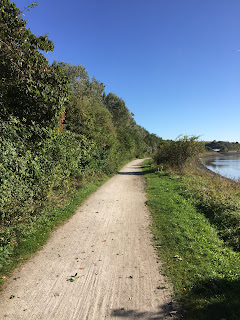 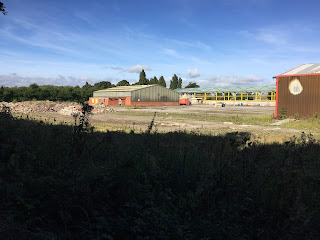 Despite a decent kick around I was only rewarded with 3 Chiffchaff, 2 Blackcap and a single Whitethroat. The tit flock that passed through only held a single Goldcrest, rather disappointing for this time of year. The rough industrial area wasn't much better with a couple of Mistle Thrush and Grey Wagtail, but sadly no Black Redstarts. With nothing much moving and my time up I headed home. Hopefully things can only get better.....!!