What a difference a few days make! The torrential rain had been replaced by unbroken blue sky and very hot conditions; fortunately the moderate breeze took the edge off slightly (but only concealed the fact that I would look like a lobster by the end of my visit!). Probably not the most ideal of conditions for anything too rare, but I never need too much of an excuse to get out onto patch. 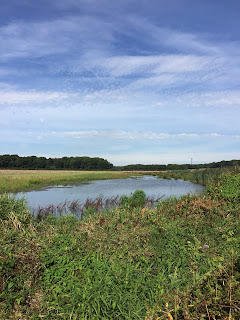 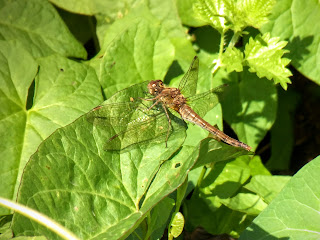 I started as usual at the flooded field on Carr Lane. A single Wood Sandpiper was still present, but was playing hard to get along the near edge and vegetation with only a few rubbish pics. A single Black Tailed Godwit was feeding along with c.23 Common Snipe, 2 Eurasian Teal and the usual selection of Mallard, Coot and Moorhen. Apart from the usual birds the whole area was swarming with Common Darter and Dragonflies. 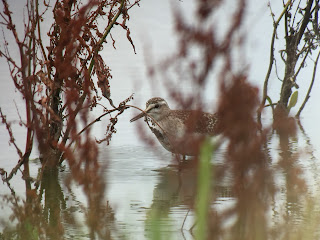 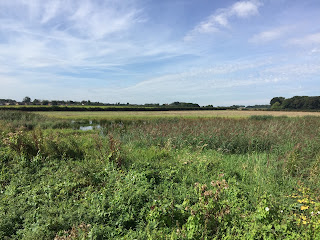 I spent a while trying to lure an Aquatic Warbler out of the reeds, but only succeeded in 5 Sedge Warblers and 9 Reed Warblers. The warm weather was obviously a relief to the local raptors with a minimum of 19 Common Buzzard on the wing, supported by a single Peregrine, 5 Kestrel and 3 Sparrowhawk. 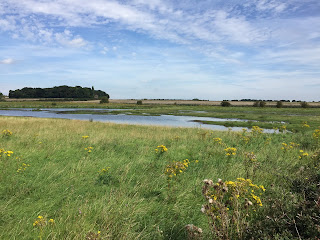 Carr Lane Pools were relatively bland with 16 Black Tailed Godwit, 143 Eurasian Teal and 7 Shoveler the only birds of note. The flood along Town Lane wasn't much better, not helped by the fact that it was still low tide out on the Mersey. 4 Ruff and 2 Little Ringed Plovers were the only birds worth of mention, and there wasn't even a sniff of the Egyptian Goose for the first time in a while. 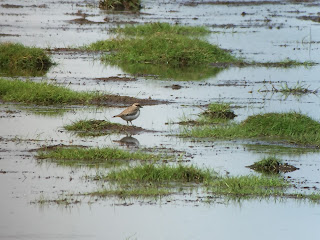 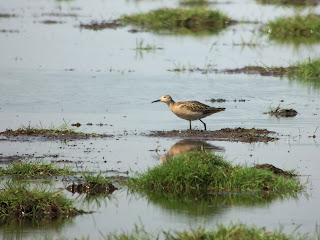 Fortunately a 2cy Hobby zooming around above my head (presumably having a field day on all of the darters and dragons) relieved some of the boredom. Hale Marsh was also quiet with 4 Little Egrets providing a modicum of excitement. There were some large flocks of gulls feeding on erupting insects, and I eventually picked out a juvenile Mediterranean Gull among the many Black Headed Gulls. 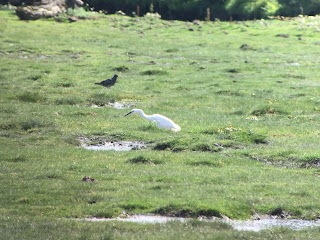 I decided to head round to Pickerings Pasture, taking the United Utilities entrance round to the scrape. There were large numbers of both Chiffchaff and Willow Warbler, with smaller groups of mixed Tits (mainly Long Tailed, Blue and Great). A couple of Blackcap were moving around, and a group of 6 Bullfinch flew over, but I failed to pick out anything better. 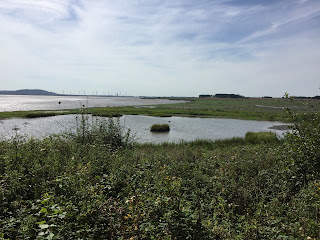 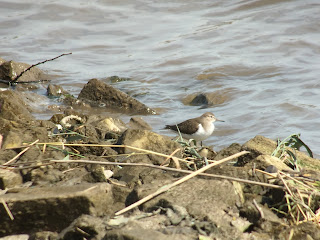 The scrape held a single Little Egret, but otherwise the Marsh was very quiet (other than the usual swarm of Canada Geese). The Mersey wasn't much better with the majority of birds sat on the far side on no-mans land. However I did pick out 800+ Black Tailed Godwit, 300+ Lapwing, 100+ Redshank, 50+ Curlew and Common Sandpiper feeding along the near edge. Despite scanning I couldn't find any small waders, and even the gull flocks didn't hold anything of interest. 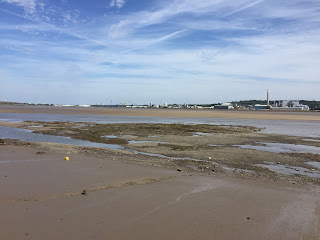 Deciding to move round Within Way, where the walk down to the shore was quiet other than a few Yellow Wagtail and a good number of Common Buzzard on the wing. The tide was still fairly low when I first reached the shore, but the speed of the incoming tide was quite scary. It took roughly 15 minutes for the rocks in the above picture to be totally submerged. The number of waders on the move was very disappointing with only c.100 Ringed Plover and c.150 Dunlin seen as the tide came in. 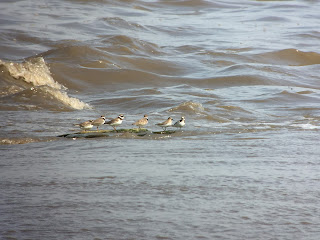 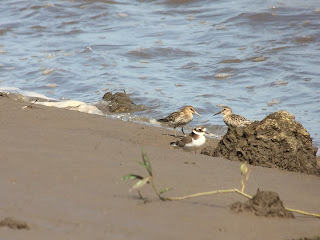 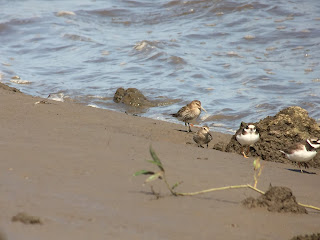 I did pick up a rather strange looking Dunlin with a very pale grey bill which appeared very chunky and long? Other than that a single Peregrine was soaring over Weston Point, whilst a male Marsh Harrier and c.20 Raven were over Frodsham Score. Having turned a redder shade of Lobster I headed back to the car to meet up with Iggy at Pickerings Pasture again. 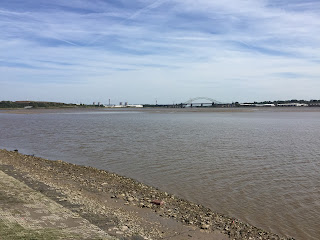 A pair of Sparrowhawk were the highlight of a very brief look from Pickerings, with the only waders present being 300+ Redshank on the far shore close to the Runcorn Bridge. With very little about and the tide pushing everything too far away I decided to head home via Carr Lane, A quick look over Carr Lane Pools revealed c.390 Black Tailed Godwit, and the same ducks as earlier. Sadly the Godwits were all feeding waste deep in the water, and in the far corner of the pools (so no colour ring spotting for me today!). As I was now looking even more red I decided to head home and climb into the freezer......I really shouldn't complain about decent weather after the drenching I got on Sunday!