Having been tied up with family commitments all weekend (and subsequently missing all of the monster high tides and a couple of decent birds) I finally managed to get out on Sunday evening. The weather had been mixed for the majority of the weekend, but Sunday had been better with largely dry, bright conditions, albeit fairly overcast. Sadly the dry conditions were not to last for very long... 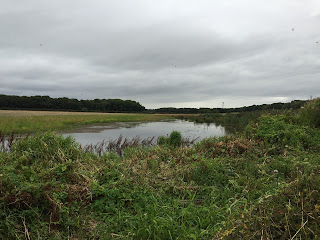 Arriving at the flooded fields along Carr Lane I immediately picked out a Green Sandpiper at the back of the pool. There were again good numbers of Common Snipe present with c.18 spread across the area. 3 Eurasian Teal were feeding among the rushy areas, but I couldn't find the Wood Sandpipers which had been present earlier in the day. 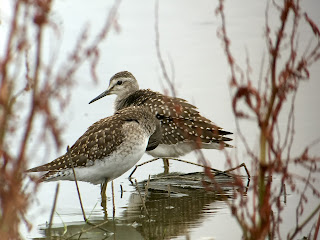 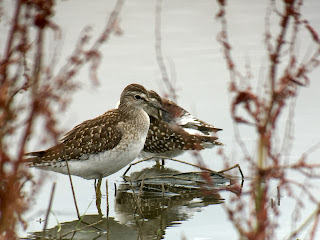 However something caught my eye, about 20 feet in front of me, and on closer inspection I was surprised to see that it was the pair of Wood Sandpiper. They performed superbly, although the vegetation still made getting clear views problematic (however even I couldn't fail to get some nice shots). A Nuthatch and Great Spotted Woodpecker were calling from Great Boar Wood, whilst a few Reed Warblers were mooching around by the bridge. The Grey Partridges are finally easier to see now that the barley has been cut and there were at least 9 birds running around. 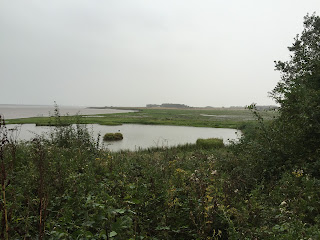 Sean O'Hara had found a group of Snow Geese on Saturday afternoon, and I was keen to try and catch up with them (more in a separate post). I headed to Pickerings Pasture, parking up at the entrance to United Utilities, just as the rain started to batter down. Arriving at the Screen the Snow Geese were feeding on the Marsh, but no sooner had I started to look at them through the scope a low flying plane flushed them all and they headed North towards Carr Lane Pools. I sat in the rain and had a brief scan of the Marsh, but quickly retreated as the rain became almost monsoon like. 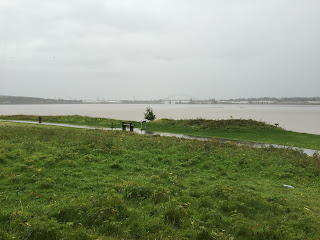 I managed to pick up 2 Little Ringed Plover out on the marsh, whilst small groups of Dunlin and Ringed Plover left the high tide roost to feed on the Mersey. Thoroughly drenched I decided to find a tree to shelter under whilst I scanned the Mersey. A flyby Little Egret looked miserable at it battled it's way through the rain. Despite less than ideal conditions I picked up a group of 4 Little Stint and a juvenile Curlew Sandpiper feeding among the c.200 Dunlin and Ringed Plover feeding on the Mersey. There were also good numbers of Redshank (c.400), Curlew (c.200) and Lapwing (c.300) with smaller numbers of Black Tailed Godwit. Gull numbers were quite impressive for the time of the year and I eventually managed to pick out a few Mediterranean Gulls amongst the hordes of Black Heads. By now I was pretty soaked so I decided to head back to the car. 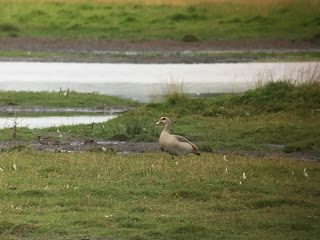 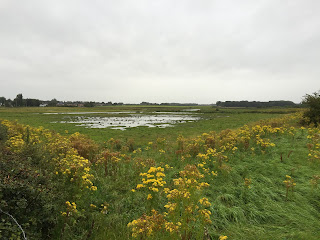 By the time I made it round to the bridge on Carr Lane the rain had eased off slightly so I pulled over to check out the flooded area. The Egyptian Goose was again present, whilst 3 Ruff flew in with a large group of Lapwing. A single Black Tailed Godwit was present, and other than a few Shoveler and Eurasian Teal it was fairly quiet. The rain was starting to get a little heavier again as I watched a Little Egret go into the decoy, so I decided to move round to Within Way to try and find some shelter. 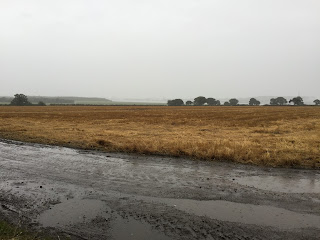 The rain continued to pelt down and I was glad to have at least found a few trees to shelter under, although I was still getting wet! At least 8 Little Egret flew into the decoy, but sadly there was no sign of the Spoonbill or Great White Egret. I was joined by Iggy and we continued to have a scan of the area, but despite our best efforts the rain hindered us finding anything of any note. 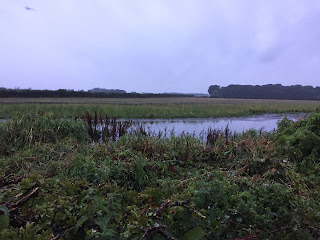 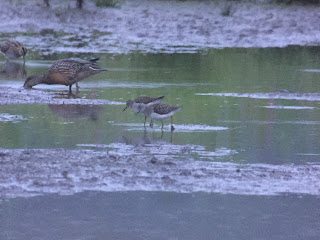 We both popped into the flooded field along Carr Lane where the Wood Sandpipers were still showing (though the light, rain, fogged up optics and wet fingers didn't make any further decent photos possible). There was not a great deal else on show, with pretty much the same numbers of Common Snipe, Eurasian Teal, Coot and Moorhen. With little else to see and my feet squelching everytime I moved, I headed home to dry out.