By the time I managed to get out today it had turned into a bit of a scorcher, the thermometer indicating 27 degrees. There was plenty of blue sky, with a few cartoon fluffy white clouds being blown along on the back of a light westerly. I had missed the high tide, although it was only a 7.5m tide so not a major loss. 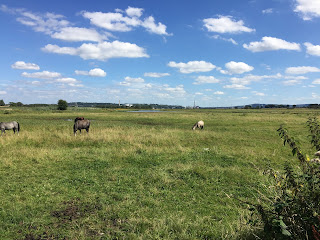 Pulling up at the flooded field along Carr Lane I was delighted to find the farmer stood by the edge of the water by his 4x4....needless to say there was nothing present! Looking across towards Carr Lane Pools I picked out 6 Common Snipe feeding in a secluded corner, whilst there were 14 Eurasian Teal, 2 Gadwall and a female Shoveler. A single Black Tailed Godwit was wading in the muddy edge, whilst the Canada Goose swarm was continuing to build. 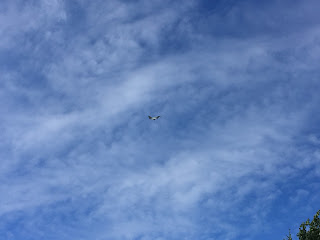 Iggy was already checking out Town Lane and said that it was quiet so I decided to head round to Pickerings to see whether there were any remnants of the high tide roost. The hedge down to the United Utilities compound was full of House Sparrow, Greenfinch, Goldfinch, Linnet and Chaffinch, whilst a Grey Partridge was calling from the weedy field just behind it. Making my way towards the scrape a Eurofighter roared over and did a few low circuits over Hale Marsh (not sure about the birds but the noise nearly blew my ear drums out). 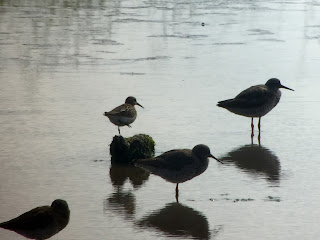 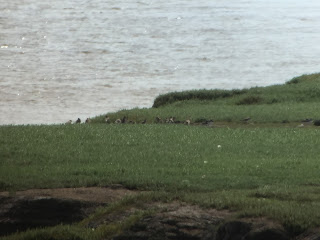 Surprisingly the scrape still held a single Dunlin and 15 Redshank, whilst the marsh had a small gaggle of 15 Ringed Plover and 17 Dunlin. However there were no gulls, or any other waders to be speak of. 3 very vocal Common Buzzard drifted south over my head towards Runcorn. I decided to move from the scrape and station myself on the Mersey banks to watch the dropping tide (and hopefully the waders). 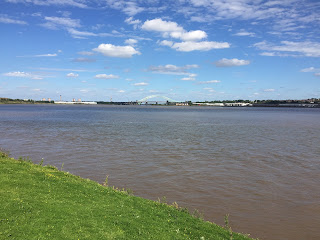 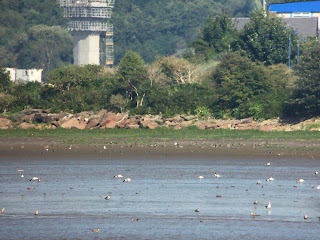 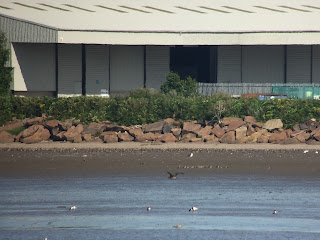 A scan of the far bank revealed c.400 Black Tailed Godwit, c.150 Curlew, c.200 Redshank c.300 Lapwing and a good gathering of gulls, but as ever they were all just too distant to give a good grilling. A Little Egret flew up the Mersey and gave a nice flyby, whilst a Peregrine was zooming around under the Runcorn Bridge. An adult Mediterranean Gull in very heavy moult joined the anting flock above my head for a few minutes, but otherwise it was very slow going. 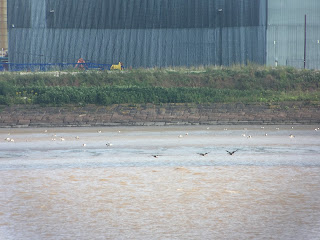 3 Greylag Geese flying up the Mersey were a surprise given their relative rarity in the patch. Despite having some good views of a Lucozade bottle, 4 Coke cans, a possible 7Up and 2 Fanta cans it was slow going and I decided to head back to Town Lane to see whether any waders had been pushed onto the Pools again. 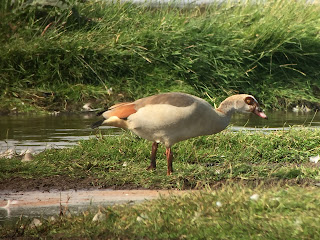 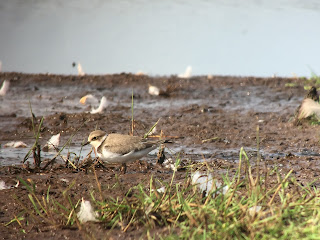 The Egyptian Goose was again showing well by the roadside flood, whilst 3 Little Ringed Plover were feeding a close quarters. A Hobby zoomed through at the back of Great Boar Wood, but didn't stay around for long. Ducks were not present in any great number, with only a handful of Mallard, Eurasian Teal and Gadwall. The heat and boredom had clearly got too much for the Ruff who was struggling to keep it's eyes open as well. 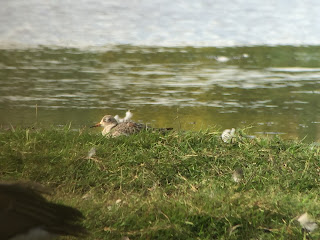 I stopped briefly at the flooded field on Carr Lane, and fortunately peace had returned. A couple of Common Snipe and a single Black Tailed Godwit had returned, whilst the Moorhen and Coot were starting to get a bit more adventurous and come out of their hiding places. A couple of mewing Common Buzzard were clearly enjoying the thermals, whilst a Sparrowhawk joined them briefly. With little moving about I decided to save some of my brownie points and head home. I suppose at least the slow days make you appreciate the good ones!