It was a fairly awful weather wise today, with torrential rain and blustery winds for the majority of it. Fortunately the rain cleared by early evening, leaving behind it some nice bright clear skies. I decided to have a quick dash down to the patch hoping that the weather may have grounded a few early migrants. 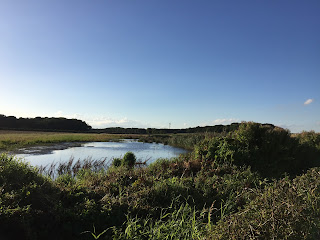 The flooded field was remarkably quiet with only 3 Common Snipe feeding out in the open. 2 Eurasian Teal and 5 Mallard were feeding at the back of the pool, whilst only a handful of Moorhen were mooching about. A single Kestrel and 3 Common Buzzard were on the wing over the woods at the back. 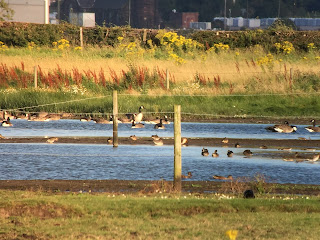 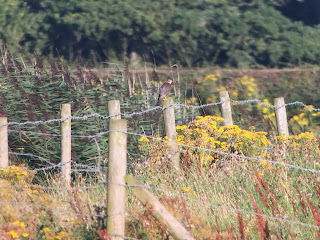 Turning my attentions to Carr Lane Pools it was evident that there had been a big increase in duck numbers with c.68 Eurasian Teal, 9 Shoveler and 5 Gadwall. There were next to no waders though with only a single Common Snipe and Black Tailed Godwit. A 2cy Sparrowhawk dashed through and landed on the fencing at the back of the Pools, giving some great views (that you can't tell from the photos!). After a procession of mobbing from Meadow Pipits, Greenfinch and Linnets it scooted off over the pools towards Hale village. 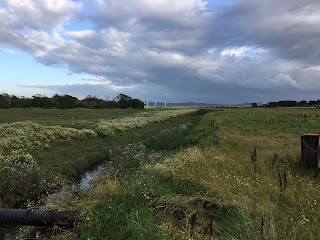 By now the clouds were drifting in and looked rather ominous, I was keeping my fingers crossed that I wasn't about to get drenched. Hale Marsh was very quiet, but the squadrons of Cormorants were already on approach into the decoy, whilst a single Little Egret and a few Grey Heron also dropped in. A couple of Kestrel were patrolling the outer edges of the marsh, which may have put paid to me finding any chats. 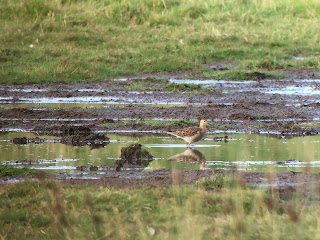 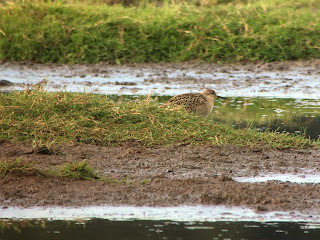 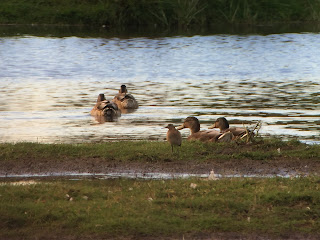 The pools along Town Lane were not much better, but held 3 Ruff (including at least 1 new bird - a very dusky looking bird). 7 Common Snipe were feeding across the area, whilst 19 Eurasian Teal were mixing it up with the local Mallard population. With very little on show and the clouds looking increasingly likely to drop some rain on me I thought I would head to Within Way to see whether anything headed into the decoy. 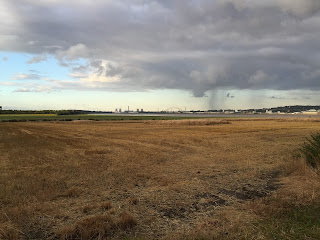 Setting myself at the corner of "Quail field" I watched the rain clouds skirt past me and give Runcorn a drenching. A quick scan of the marsh revealed a pair of Greylag Geese among the hordes of Canada Geese. 4 Mute Swan (surprisingly hard to see other than on Frodsham Score) flew east up the Mersey towards the bridge. A number of Yellow Wagtail and Meadow Pipit were on the move over my head, making it feel a lot more autumnal. 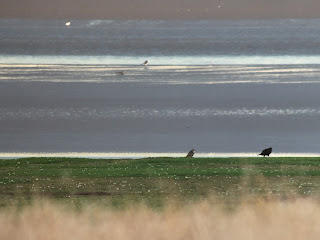 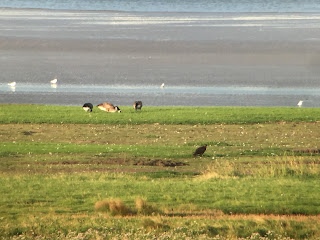 An adult Peregrine was sat on the edge of the marsh with a juvenile Marsh Harrier keeping it company. The Marsh Harrier was clearly enjoying it's trip over to Hale actively hunting and then returning to sit on the deck. As dusk set in I picked up a further 3 Peregrine, including a bird that caught and proceeded to eat what looked like a Woodpigeon. I was joined by local birder Jackie, and we enjoyed some good views of the Peregrine as it plucked away at the Pigeon. A single Little Egret flew in from Pickerings, but otherwise it all went quite quiet. 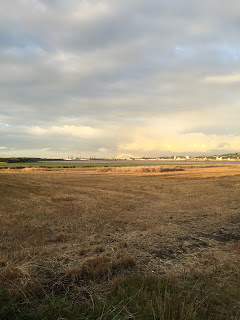 Walking back to the car we had a large group of hirundines hunting around the church; mostly all House Martins, but the group also contained at least 5 Swift still. A brief snippet of what sounded like a Spotted Flycatcher made us stop for a couple of minutes, but sadly it didn't call or show itself again. Jackie headed off whilst I decided to have a quick look at the flooded field along Carr Lane again. 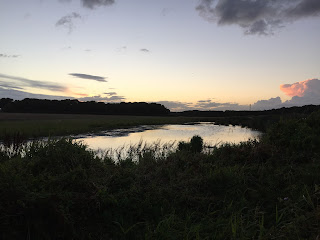 A few more Common Snipe were feeding in the open, whilst a pair of Kestrel were still feeding in the near darkness (presumably making up for the wet day). Another quick scan of Carr Lane Pools picked up a pair of Little Ringed Plover, but nothing else new in. With the light almost entirely gone I headed home for a well deserved glass (bottle) of wine.