A Spot of Evening Bling

It felt like a very long week at work with no patch birding. The lighter evenings are already starting to draw in, but fortunately I managed to grab a few hours tonight. It was a nice bright evening, with a blustery WNW wind. It felt relatively mild to start with, but as the sun starting to drop the wind made it feel quite chilly. 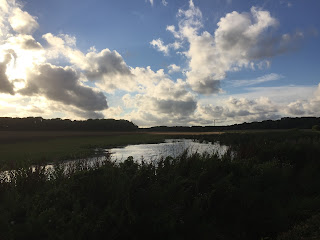 I popped in briefly at Burnt Mill Farm on the way down Carr Lane, but other than a single Grey Partridge it was very quiet. Despite the hedges having had a trim, the vegetation by the flooded field is still restricting good views without climbing on the car roof. 7 Black Tailed Godwit were feeding on the field, whilst there were also 3 Common Snipe and a single Green Sandpiper. The reeds were alive with fledged Reed Warblers, whilst a Great Spotted Woodpecker was calling from behind me in Great Boar Wood. 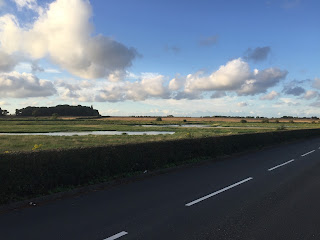 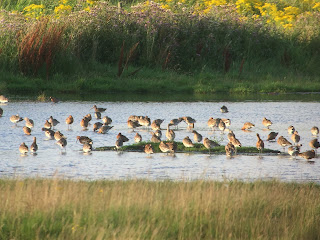 Moving round to Town Lane I met up with Iggy who had been scouring the wader flock at Pickerings (things are certainly looking up with a number of Knot, Sanderling and good Dunlin numbers - something for tomorrow I think). The main pool was relatively quiet with only c.50 Black Tailed Godwit and a few Lapwing, but little else. Fortunately the road side pools along Town Lane were a little more productive. 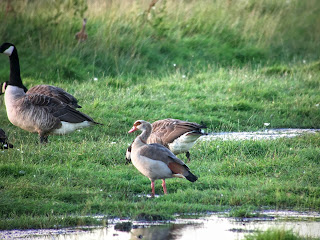 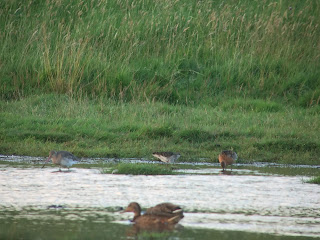 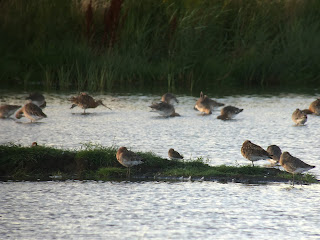 The Egyptian Goose was feeding among a small group of Canada Geese, and providing some of my best views this year. There were c.340 Black Tailed Godwit, single Dunlin and Ruff, but sadly the "low" high-tide (only 6.6m) had failed to push much else in. We had a good look through the Black Tailed Godwit and eventually I picked out a colour ringed bird (ringed in Portugal by Jose Alves) - LB-GG flag. I'll look forward to getting the full details in due course. 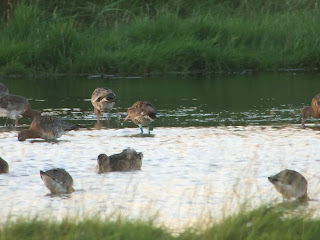 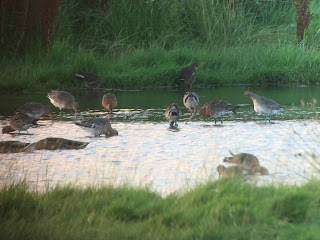 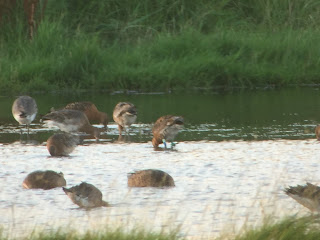 A Kestrel was hovering distantly over towards Pickerings, whilst the Cormorant numbers were again quite impressive. Hale Marsh was very quiet, but Swift and hirundines numbers were still impressive. I was getting rather cold, having decided to forego a jacket.....so we decided to head round to the flooded field again. We are both confident that it will produce a Crake sometime soon, we'll just have to put the hours in! 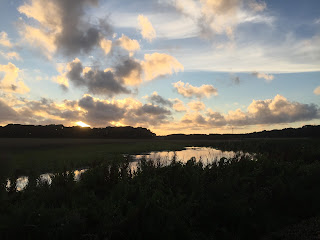 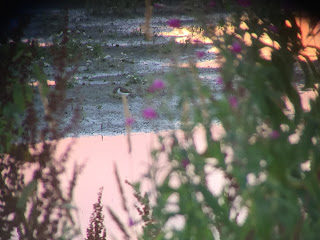 Jumping on top of the car roofs we immediately flushed a whole group of waders - 7 Black Tailed Godwit, Common Sandpiper and 11 Common Snipe. Iggy headed home, but I decided to give it a bit more time. A couple of Sparrowhawk went ghosting through, and a Hobby came in from the west and appeared to drop into Great Boar Wood. Common Snipe were arriving the whole time and I reckon there must have been up to c.19. As the sun started to get lower the numbers of Moorhen and Coot increased, and slight heart in mouth moment as a Water Rail crept out of the cover at the back of the Pool; not the Crake I had hoped for, but nice none the less. 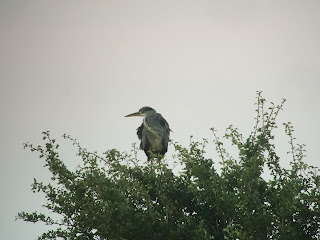 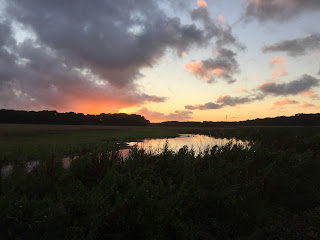 As the sun dropped further a pair of Green Sandpiper came calling over my head and landed at the back of the Pool, whilst the Grey Herons were very vocal. With the light deteriorating quickly and making identification of anything near impossible I decided to head home. A Tawny Owl flying over Brodie Avenue was nice addition to the day, but well off patch boundaries.

Roll on some decent wader scouring over the weekend.....