Blame it on the Weatherman

The long range forecast had promised heavy rain and cloud for the day, however it was dry and relatively bright when I woke. Looking at the forecast it indicated that it should be dry but a little overcast (maybe I should have just listened to the long range forecast!) But with the prospect of a bit of patch birding I headed out. 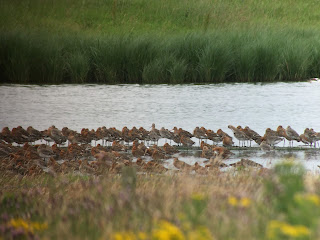 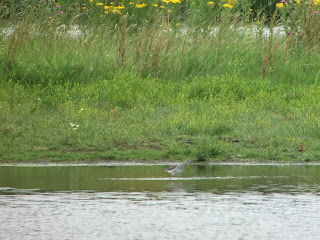 Starting at the gate on Town Lane I was pleased to find that the Black Tailed Godwit flock had returned with c.500 birds present. A Greenshank was feeding on the front edge of the island, whilst 2 Ruff were mingling with the Godwits. A small group of c.50 Godwit flew up revealing a single Bar Tailed Godwit, my first returning bird of the autumn. Ducks were in very short supply with only a single Eurasian Teal, 3 Gadwall, and the family party of Tufted Duck. The 1cy Hobby showed briefly at the back of Great Boar Wood. 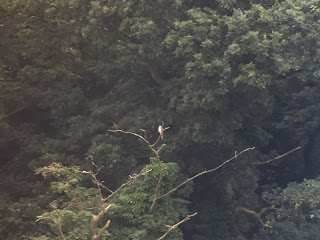 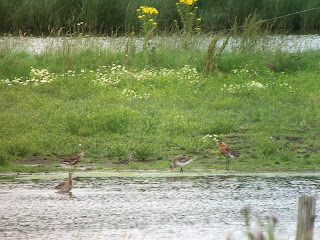 I walked along Town Lane to the bridge but there was very little of note. The wet fields held more Black Tailed Godwits but there were no ducks at all today. Hale Marsh had an autumnal feel to it, with Meadow Pipits moving over. Bumping into Rob Cockbain we headed back to the gate where the Ruff were showing much better (the size difference between the two males was very surprising). A Sparrowhawk was sat distantly at the back of the second section of Great Boar Wood. The rain was just starting when I left and headed round to Carr Lane. 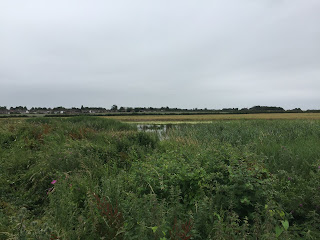 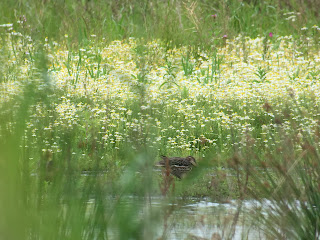 The flooded field is still a nightmare to view, but I made a number of attempts to get some angles into the area. I was rewarded with what were presumably all of the ducks that should normally be on the main Pools. 3 Garganey (2 eclipse male and a female), 4 Shoveler, 12 Eurasian Teal, 6 Gadwall and a good number of Coot. A Wood Sandpiper was walking along the back edge, whilst 2 Snipe were feeding away in the open alongside a couple of Redshank. Not a bad return, but near impossible to get a clear view of the entire area, so there could well have been more lurking in the corners. 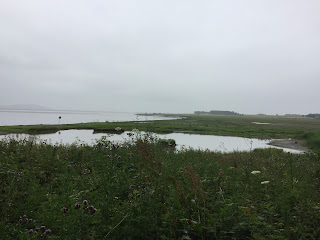 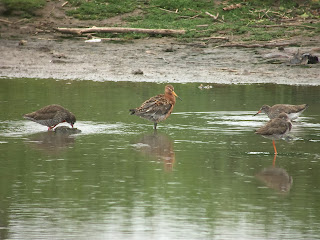 The weather was really starting to close in as I headed to Pickerings Pasture. The approach track from United Utilities was probably the quietest I have seen it for some time, and with no distractions I reached the hide. The scrape had 57 Redshank roosting (my highest count for some time - and despite the fact it wasn't high tide!) and a single Black Tailed Godwit (who looked a bit miffed that he was on his own). 3 Little Ringed Plover were again feeding out on the Marsh, but otherwise it felt very slow. 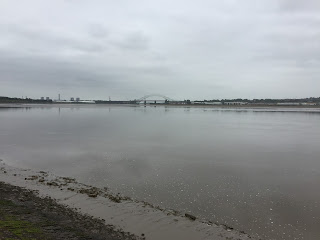 A Peregrine was sat distantly on the Runcorn Bridge, whilst there were good numbers again of Curlew (c.150+). Gull numbers continue to swell with a big build up of Lesser Black Backed Gull with smaller numbers of Herring and Black Headed. A Greenshank was feeding along the edge of water under Hale Marsh, but there was surprisingly no Common Sandpiper today. The rain started to get heavier so I head back to the car to decide where to head next. 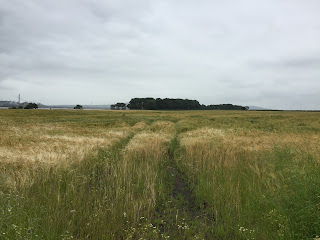 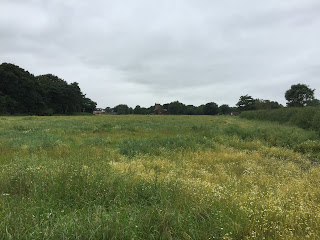 The rain had eased slightly so I decided to head round to Within Way. The hedges were alive with birds with the most numerous being Linnet, Goldfinch, Greenfinch and Whitethroat. A pair of Great Spotted Woodpecker were very vocal by the farm. Skylark seemed to be everywhere, whilst the hedge/fence-line to Hale Marsh held a number of juvenile flava Wagtails. I had brief views of one of the juvenile Redstarts again, but again it was very skittish. 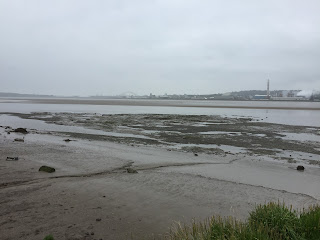 The rocks at the end of Within Way held 2 Common Sandpiper, but with the rain getting heavier again I gave up trying to scan the river (partly because I couldn't even see the other side). I spent longer scouring the bushes and was rewarded with the Lesser Whitethroat again, another brief view of the Redstart and good numbers of Whitethroat, Reed and Sedge Warbler. A number of Chiffchaff had also appeared, whilst I also picked out a Willow Warbler. A Corn Bunting was singing from the Barley field again, whilst finches were constantly on the move. Now soaked through I decided to call it a day and dry off.

Despite the weather an enjoyable patch visit. It will be interesting to see what the impending High pressure (bringing our BBQ Summer) brings along with it, hopefully lots of rare herons and maybe a Mediterranean speciality......I can but dream!