A mixed day of weather with generally dry and bright conditions but very blustery. However if you were unfortunate to get in the way of one of the rouge showers you could get a drenching (as Iggy and I did this afternoon!). I had been down at Otterspool Promenade watching Mediterranean Gulls when 7 adult Sandwich Terns flew south in the direction of the patch. Needless to say the engine was fired up and I was heading towards patch minutes later. 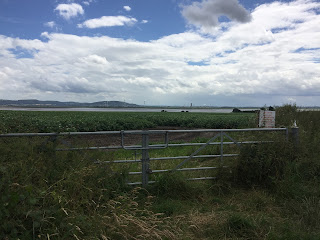 I had given Iggy a ring on the way, and I arrived seconds in front of him. Setting up our scopes quickly we nearly had our heads taken off by an exceedingly low juvenile Peregrine. A couple of Yellow Wagtail were buzzing around over the fields whilst smaller numbers of Swifts and Swallows were moving south. A "comic" Tern flew west, but remained a little too distant to positively ID. With the haze making things difficult we decided to head down to the Lighthouse. 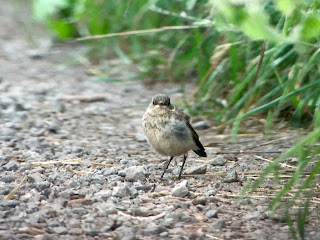 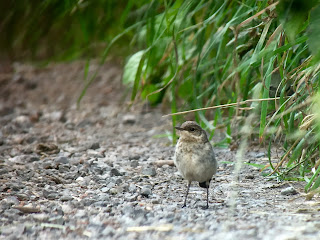 We were both rather surprised to see a juvenile Wheatear fly up from in front of us. Double checking to make sure it was nothing rarer, we spent a while watching it being pushed up and down the track by the Sunday walkers. Arriving by the Lighthouse we had excellent views of a Kestrel that decided to conveniently hover close to where we were standing, whilst it was constantly mobbed by a procession of Meadow Pipit, Yellow Wagtail and Linnet. 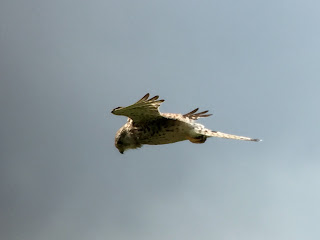 After much scanning I eventually picked up a very distant juvenile Sandwich Tern (only my 2nd patch record - involving 5 birds). A few groups of Black Tailed Godwit moved through, presumably to either roost at Frodsham or Carr Lane Pools. The Score again was covered in Canada Geese, but it was interesting to find at least 26 Greylag Geese (a surprisingly rare bird on the Hale side of the Mersey). There were again good numbers of Raven, whilst small groups of waders, gulls and ducks were roosting a little too distantly to have a proper look through. However a very smart 1st summer Yellow Legged Gull flew past at about mid range, my first of the summer. 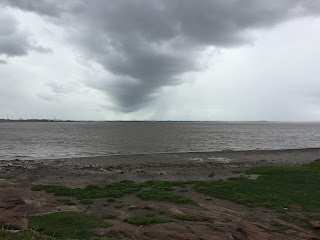 By now the clouds and rain were now heading rather quickly towards us, and we thought it may be best to head back to the car. Swifts were dropping out of the heights ahead of the rain, whilst smaller numbers of mixed hirundines were joining the feeding frenzy. Our fatal mistake was to have another look at the Wheatear, which delayed us just long enough to get drenched on the final walk back to the cars.

With the rain looking fairly set in, I decided to save my birding brownie points and head home. All in all a fairly successful brief patch visit, just a shame that the rain decided to get in the way!!