It was another bright day, with temperatures still in the mid-20's. The variable cloud often made it feel quite muggy. The tides were fairly decent overnight with peaks at roughly 8.20m, but the day time tides were lower only reaching 7.85m. I finally managed to get out for a bit of patch birding by early afternoon, but had missed the peak of the tide. 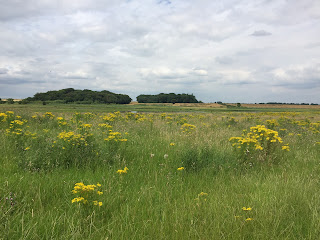 I decided not to head to Pickerings, but instead check out Carr Lane Pools hoping that the tides may have pushed in a few more waders. I headed to the gate on Town Lane and settled in for a while. The Egyptian Goose was again present, and was feeding actively for once. 5 Little Ringed Plover (4 juveniles) were feeding on the muddy edges. 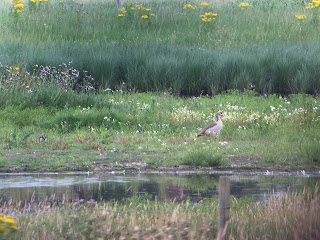 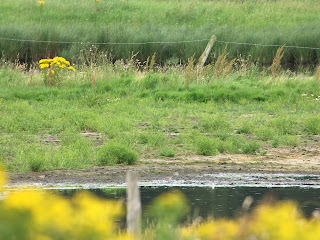 There were some impressive numbers of Black Tailed Godwits spread across the site. A Common Buzzard flew in and scattered everything, which was actually a blessing in disguise. The wheeling flock of Godwits, meant that I could give a clear estimate of c.1000 birds, the highest count so far this year. The flock of waders also contained a minimum of 5 Ruff, 9 Dunlin and a single Common Sandpiper. Sadly all too quickly everything settled down again, which meant that it was back to trying to grab views between the vegetation again. 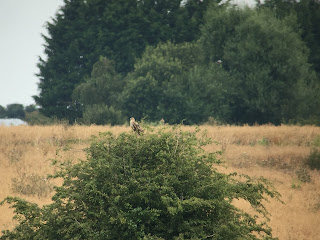 A further scan revealed 2 Common Snipe, whilst the small party of Dunlin sadly largely remained out of sight. Duck numbers were remarkably poor with only 3 Eurasian Teal, 5 Gadwall and the usual gaggle of Mallards. A Sparrowhawk was circling over Great Boar Wood, whilst a female Kestrel was giving one of the Hobby a good going over. I decided to head along Town Lane to check out the closer Godwit flock. 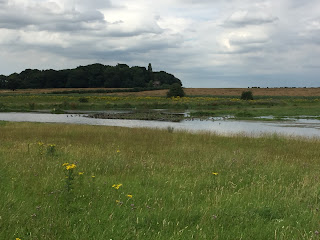 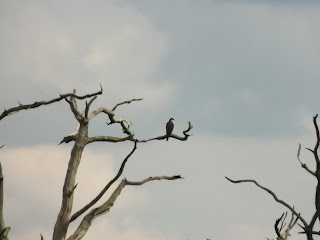 The immature Peregrine (tentatively aged as 2cy - although the heat haze was shocking) was sat on the dead oaks on the decoy. Common Swift numbers are certainly increasing at the moment, probably pending their imminent departure, and today was no different with a very rough estimate of c.1000 birds in the air at one point! 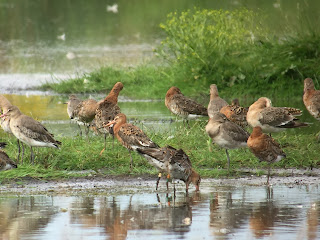 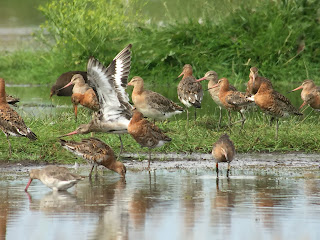 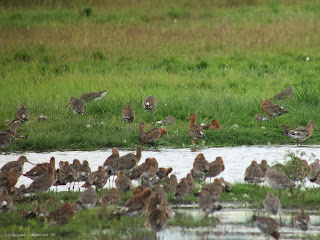 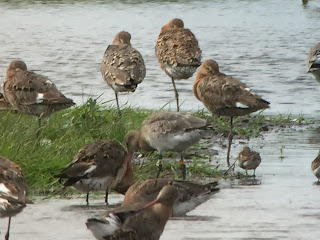 I ultimately spent a long time looking for colour-ringed Black Tailed Godwits, and successfully managed to find 4 (of which I only managed to get the full combination on 2). It is surprisingly satisfying sifting through to suddenly see a colour flag. It will be interesting to see where these islandica have been seen previously. It was all Godwits though with 2 Ruff, 7 Dunlin, Common Snipe and a fly over Little Ringed Plover. 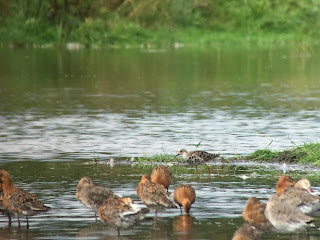 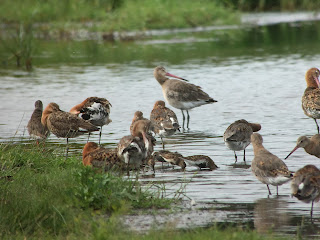 I returned to the gate on Town Lane and bumped into Rob Cockbain who had been doing a WeBs count at Pickerings. Fortunately I hadn't missed out on too much, but in total we estimated there must be at least 1600 Black Tailed Godwit in the area at present. There was little else new into the main Pools, so we decided to head round to Carr Lane. 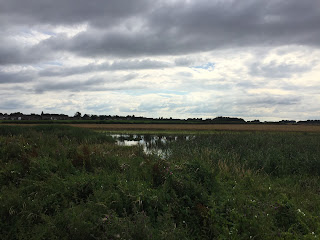 Standing on the concrete block by the bridge I attempted to have a look into the flooded field, but could only see a small sliver of the area, and other than a few Mallard and a single Coot it seemed quiet. Walking back along the hedge to try and peer through a couple of other gaps, Rob suddenly exclaimed "That's not a Coot". The rest is history as he had found a Glossy Ibis (presumably the bird seen heading south-east from Lunt a few hours earlier). Trying to get better views or even a picture proved more problematic..... 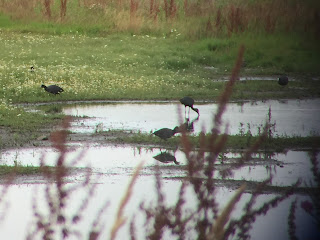 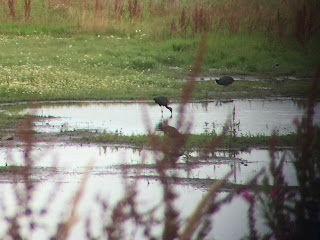 I eventually relented and climbed up onto my car roof, which at least meant I had a bit more height. Despite this the vegetation still made things difficult! I managed to get a few poor iPhone-bin shots, but they weren't the greatest. I spent a little longer with the Glossy Ibis, but was quickly running out of time. Fortunately Iggy (thanks for the pics) was down shortly after I left and managed to get a few much better shots (below), maybe it is time for me to upgrade to a point and click camera..... 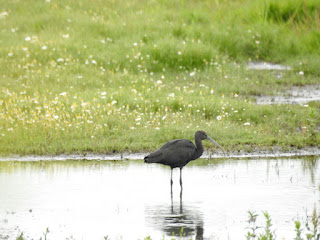 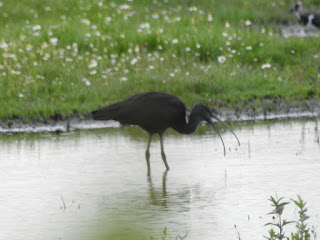 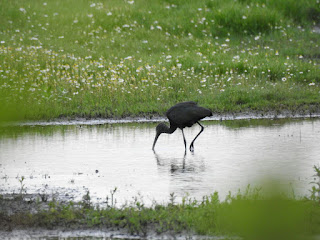 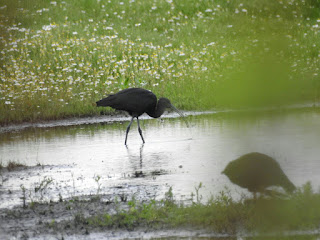