It was quite mild today, with some broken cloud by the time I headed to patch to meet Paul Kurs. Paul was keen to catch up with Iceland Gull, so I offered to help him with a bit of afternoon Gulling at Hale Lighthouse. Whenever I have birded the patch with Paul, he has always been a bit of a lucky charm, so I was hoping for a bit of the same today. 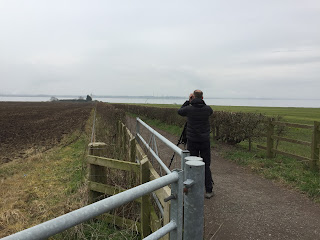 The weedy field on Lighthouse Lane has finally been ploughed over and now looks primed for the fresh arrivals of Wheatear. Although there were no Wheatears yet, the fields were covered in Pied Wagtails and a single White Wagtail (the first of the year for me). We also managed to pick out a few Yellowhammer, Reed Bunting, Linnets and Skylark. Nearing the Lighthouse Paul picked out a redhead Goosander flying east with two Mallards, a great bird to start. 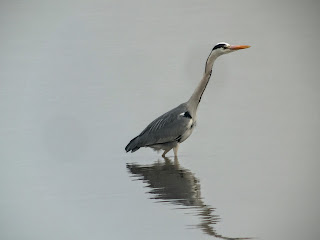 The high tide was starting to recede, so we settled down to have a scan of Frodsham Score and the newly exposed mud. Frank Duff had earlier found a Dark Bellied Brent Goose on the Score, and after a bit I finally picked it up albeit very distantly - a sub-species patchlifer for me! We also picked out a Great White Egret, immature (2cy?) female Marsh Harrier and numerous Ravens. The exposed mud on the Hale side had a couple of Grey Plover, 70+ Dunlin, 30+ Ringed Plover and some nice close views of common bits and pieces. 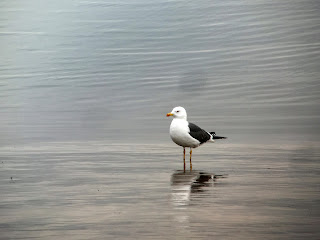 The Brent Goose decided to have a bit of a fly around the Mersey, moving up towards Ellesmere Port, before swinging back round and dropping onto the edge of the Score. At least we got marginally better views. The number of Gulls were slowly starting to pick up and I picked out a 3rd Winter Yellow Legged Gull, but the "big" Gulls were a lot lower than of late. Mark Garner joined Paul and I for the evenings proceedings, commenting that he was surprised that there weren't more Mediterranean Gulls.....as I picked out a 2nd Summer flying past our position. 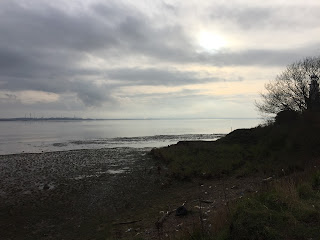 The sun was just starting to break through the clouds, providing some much better light as the number of "big" Gulls started to move through. I picked up a 1st winter Gull about mid-river heading West. The white head, and small piggy eye immediately got me excited, and the overall multi-tonal upperparts looked good as it drew level with me, finally exposing a lovely white underwing - Caspian Gull. I managed to get Paul and Mark on the bird as it flew away from us and towards the exposed sandbars opposite Ellesmere/Ince Marshes. A well overdue patch lifer, especially given the number that are seen at Richmond Bank. 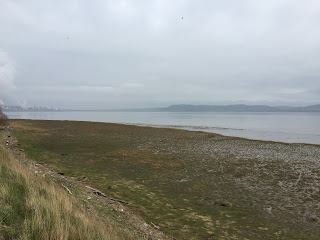 Patrick Earith and Phil Oddy joined us to continue the Gulling vigil, and it wasn't long before Mark picked up a 2nd winter Iceland Gull flying west. Despite it being distant to start with (probably opposite Pickerings Pasture) it stood out like a sore thumb, and we all got great views as it flew past us. Gull numbers were not as impressive as of late; but with birds coming through at all heights and distances it made it difficult to check all the birds moving West. Paul and Patrick headed off pleased with their respective visits, leaving Mark, Phil and myself to continue watching the ever increasing Gull numbers. 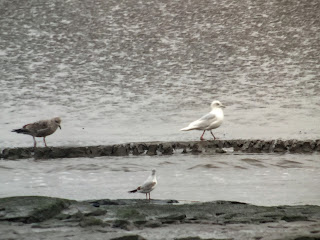 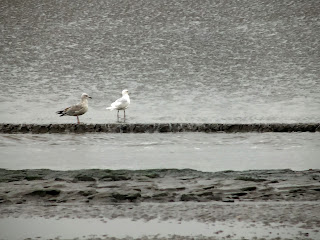 I was scanning very close to the shore when I picked up the same 3rd Winter Iceland Gull from the last few nights, and I even got some half decent (for me) shots of it! This was pretty much the last action of the day for me. Despite Gulls continuing to move through I thought I would head home (like the Iceland Gulls), the talk of food having persuaded me to leave before last light for the first time in quite some time. The walk back to the car was filled with singing Skylark and calls of rather territorial Grey Partridge. Spring is clearly in the air, but the Gulls are hanging on in there and will keep me coming back for at least a week or two. 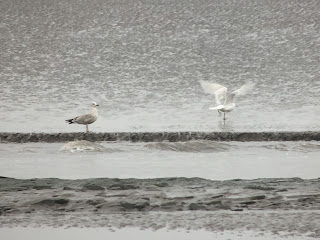 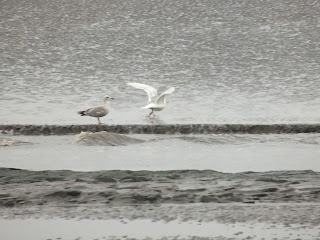