The Gulling Goes On

The early rain had cleared leaving a milder (finally into double figures again!) overcast afternoon. It was relatively bright and I was hopeful that despite the poor tide times that the Gulling at Hale Shore would be good. 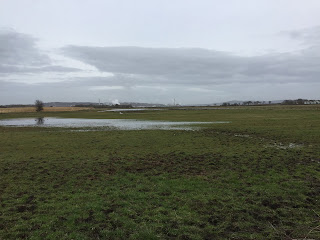 Rob Cockbain had texted me early afternoon to let me know that there was a Green Sandpiper on Carr Lane Pools. Despite a fairly good search I failed to relocate it, but the Pools did hold 158 Teal, single Black Tailed Godwit and 12 Redshank. A Little Grebe in Ramsbrook (the stream by the bridge on Carr Lane) was the first on patch this year, the water levels on Carr Lane Pools are not looking promising for successful breeding this year. 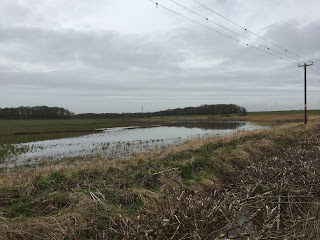 At least three Buzzard were displaying at the back of the fields, but otherwise it was quiet. At least it won't be too long before the first waders start moving through the patch.

Moving on I parked up and walked along Lighthouse Lane. The weedy field and hedgerow held c.35 Reed Bunting, c.7 Yellowhammer, and a few Linnets, Meadow Pipit and Skylark. It was evident that some of the big gulls were starting to move (much earlier than of late), but only small numbers were gathering on the mud/sand banks on the Mersey. 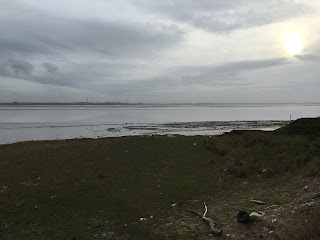 Scanning Frodsham Score I picked up one of the regular Great White Egrets (stalking one of the sheep), 5 Little Egret and c.10 Pink Footed Geese. The Swan herd (totalling 48 birds) had moved a long way west, and were just a little too distant to assign to species. A thorough grilling of the geese failed to locate anything further of interest, but I picked up 2 Avocet on the Mersey in almost the identical spot to the other night. A couple of pairs of Raven made the short trip across the Mersey, possibly birds prospecting for nest sites? 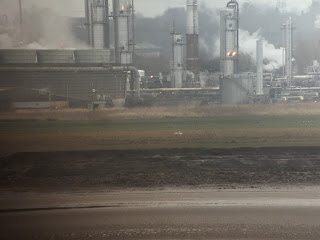 Gull numbers were slowly picking up as Sean O'Hara and Ian Igglesden turned up for tonight's Gulling session. I picked up an adult Iceland Gull on one of the central sandbars, sat nicely in the open. However just as I was about to show Sean the whole group got up and flew towards us; this did at least allow me to pick up a 2nd bird that must have been hiding deeper in the group. I kept watching one of the Iceland's and was able to pick it out as it landed, getting Ian onto the bird (slightly easier at it gave a good wing stretch).

Gulls by now were starting to flood through with at least 5 Yellow Legged Gulls (2 x adult, 1 x 1st winter, 2 x 3rd winter),  picked out among c.15,000 Herring, c10,000 Lesser Black Backed, c.30,000 Black Headed, c.15,000 Common with smaller numbers of Great Black Backed. Fairly impressive numbers! I picked up a further adult/3rd winter Iceland Gull amongst the Gulls flooding up the Mersey, which dropped into the same group that held the first Iceland of the evening. Gulls were still moving, as the light went and the Grey Partridges made their presence known.

The Gull numbers are remaining high, and I'll no doubt continue watching the Gull roosts for the next couple of weeks. Maybe I'm just being greedy, but I'm hoping that there is still time for one last good Gull before the winter is out.....roll on the next session!