The early snow had given way to cold, damp and windy conditions on patch this afternoon; the tail end of Storm Jake still clearly wagging. 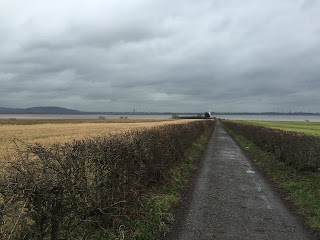 Arriving a little early for Gulling I decided again to head to Hale Shore to look for the recent flock of Twite. Climbing down the river wall to the shore I had a quick scan of the Mersey, and was pleased to see that Ringed Plover and Dunlin numbers were continuing to build - at least a tenuous link to Spring! 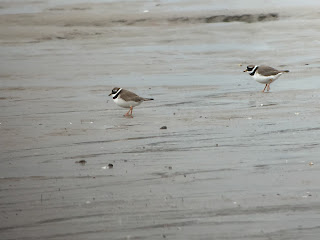 The murk again made scanning Frodsham Score difficult, although I did succeed in picking out a Great White Egret on the very edge of the score. There were large numbers of Wigeon feeding just below the Score banks, and a few Pink Footed Geese were visible in the Canada Goose flock, but otherwise the drizzle made it hard work. 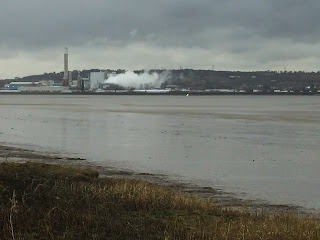 Continuing along the shore to Within Way I flushed roughly 21 Common Snipe and a single Jack Snipe, along with 4 Rock Pipit (all of which appeared to be nominate petrosus - including one exceedingly dark bird). I'm always surprised to see Grey Partridge on the shore, and today was no different with at least 10 birds flushed from the damp reedy ground. A further Great White Egret flew east past my position, and a further quick scan of the Score picked up roughly 20 Raven. 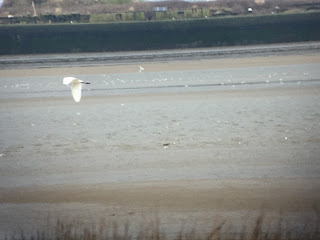 I had initially thought that I would try Gulling from the end of Within Way, especially given Bill Morton's success with 3 adult Iceland Gulls last night from Frodsham. However the wind and drizzle were just a bit too much for the exposed position, so I looped back towards the Lighthouse. Finding a slightly more sheltered position I started to scan the Mersey again, and quickly picked up two yearticks. The first a smart male Goldeneye flying east upriver and towards Pickerings, and then a group of 5 Avocet that flew in and pitched in the gutter by the outflow over at Frodsham. 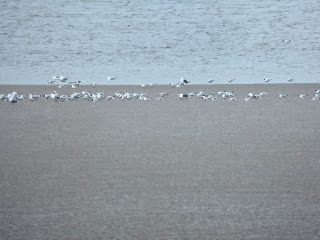 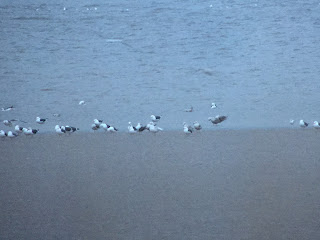 ﻿
﻿
I was joined by Ian Igglesden for the Gulling, he even managed to find some washed up oil drums for us to sit on to make the scanning slightly more comfortable. The gull numbers were lower than of late, the tide and wind again appearing to have an impact on location and numbers. However we persevered and quickly picked up a 2nd winter Mediterranean Gull and 2 adult Iceland Gulls, along with a couple of Yellow Legged Gull (3rd winter and adult). Ian picked up yet another Great White Egret flying east, the third of the day and by far the closest. I then picked up a very interesting looking gull, which superficially looked like an Iceland Gull. The bill appeared washed out (greenish, and appeared slightly more heavy than the other Iceland's); the primary projection was shorter, and the outer primaries were a darkish grey. Everything seemed to point towards a Kumlien's! I managed to get Ian onto the bird and we attempted to get some more views. Sadly we weren't able to pick it out again in the gathering darkness, probably not helped by my near stumble of excitement from my oil drum! Hopefully we'll pick it up again in the roost again and get a more definitive ID. 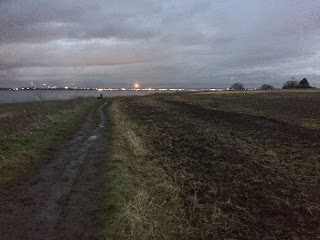 By now the light had almost entirely gone, so we both headed back to the cars listening to Grey Partridge and talking about birding in warmer climes. Roll on the next Gulling session....maybe I don't want Spring to come along just yet!
Posted by daveliverbirder at 13:57