It felt a lot milder today, with plenty of sunshine and lighter winds; so I was hopeful that the Gulling tonight would be a slightly more pleasant experience. Meeting Iggy on Lighthouse Lane, the late winter sunshine made the Mersey look golden. 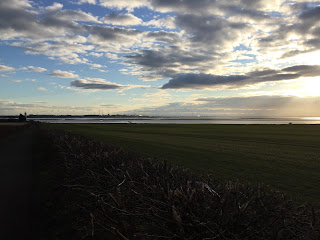 Walking down to the Lighthouse I noticed that the wind was picking up slightly, but the light was good and there already appeared to be a good gathering of Gulls. Grey Partridge seemed to be calling almost continuously from the weedy fields, and a few Reed Buntings and Linnets whizzed around. Setting up east of the Lighthouse, we had a brief scan of the Score and Mersey, picking up 7 Avocet, plenty of Ravens over the Score, and the Starling murmeration just starting to get going. 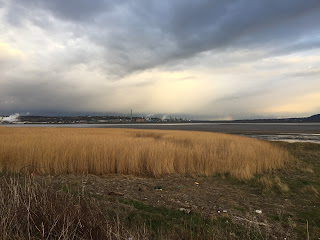 The clouds by this point were starting to gather, and we both thought that we had dodged the rain as we scanned over towards Weston Point and Frodsham. We were wrong.....but undeterred we continued our vigil. I picked up a 3rd winter Yellow Legged Gull, quickly followed by an adult Iceland Gull which flew in and seemed to pitch almost opposite our position, but we both lost it as it landed. The rain, followed by torrential hail made viewing difficult and we watched a Great White Egret as it struggled to make any headway against the hail and wind. One of us decided to wimp out and shelter at the bottom of the river wall......whilst Ian continued to watch from the top. 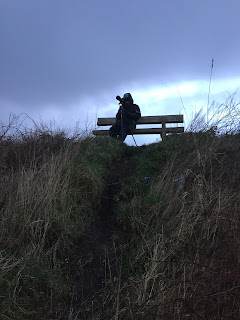 I was close to calling it a day as I was drenched, and getting increasingly cold, but Ian managed to convince me to give it another 5 minutes. Fortunately the rain and hail did stop, and revealed a mass of Gulls that presumably were grounded by the weather. I estimated in the region of c.30,000 Black Headed, c.5000 Herring, c.2000 Common, c.1000 Lesser Black Backed and c.300 Great Black Backed. The tide was an hour later than yesterday, and this made a big difference with the Gulls having more space to feed and roost and many of the Gulls using sandbanks and mudflats further way from our position. 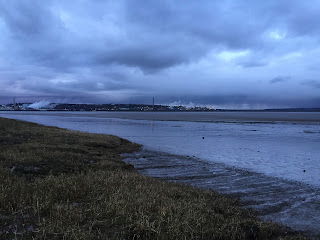 I managed to pick out a further 1st winter Iceland Gull, a really milky coloured bird, however again it landed and disappeared. Small groups of Dunlin and Ringed Plover were moving up towards Pickerings, whilst Oystercatcher numbers also seem to be on the rise. The Gulls continued to flood through, but by now the light was fading fast, and the Gulls were all too distant to ID so we called it a night. The walk back to the cars didn't produce too much else, but chat of old twitches was great fun....seems like a lifetime ago. Hopefully we can turn a mega up on patch this year to make up for it.