It felt a lot more Spring-like today with warm sunshine and plenty of blue sky, although the north-westerly still made it cold at times. With a small passage of Meadow Pipit and a couple of Buzzards over my house, all of the signs looked good for a visit to the patch. 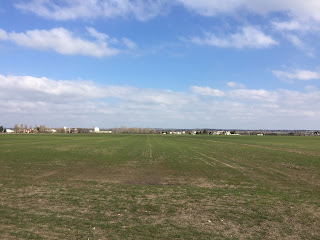 Arriving at Burnt Mill Farm there were already a good number of Buzzard on the wing, many slow wing-beating and stooping. I spent a good half hour scanning for raptors and had a minimum count of 19 Buzzard, 3 Sparrowhawk, 4 Kestrel and a Peregrine. It really felt like a good day for an Osprey, but nothing materialised. A slightly funny "Corn Bunting" singing from the tall trees by the farm, had me scanning for a good while before I realised that it was a Starling mimicking! Certainly the first time that I have heard Starling mimicking Corn Bunting; sadly I didn't manage to pick up any "real" birds again. 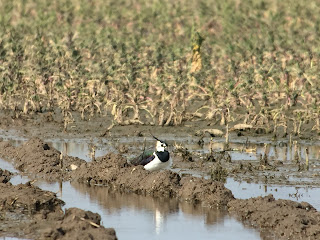 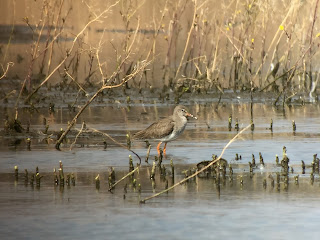 The flooded fields on Carr Lane held a pair of Lapwing and 3 Redshank, which were scattered by a male Merlin dashing through. It perched up briefly before pursuing a female Merlin that was zooming around the back field; and a further female/immature bird was also found perched up in the trees. The Little Grebes were again making a racket from deeper cover, whilst the reeds were full of Reed Bunting. Great Boar Wood again held a Nuthatch, whilst at least two Great Spotted Woodpecker were drumming away. 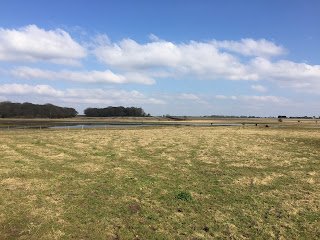 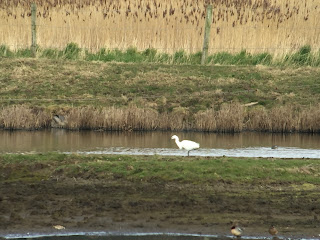 Carr Lane Pools were quiet again, but held a single Little Egret, 11 Black tailed Godwit, 2 Snipe, and the usual selection of Teal and Shelduck. The mewing of Buzzards was constantly in the air, whilst I watched a Merlin (one of the Carr Lane birds?) hunting Snipe on the edge of Hale Marsh, the Merlin only failing to catch one after some particularly good manoeuvres by the Snipe. Hale Marsh was full of the sound of displaying Meadow Pipit and Skylark, but otherwise it was another Wheatear-less landscape. A further Peregrine and 9 Buzzard were soaring around, including the Rough-leg look-a-like which had gone missing for most of the winter. 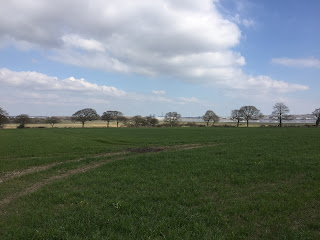 Within Way produced some more Buzzards, and two yelping Little Owl from two different locations - promising some more breeding birds on patch this year fingers crossed. Ravens had joined the raptors on the thermals, having made the short journey across the river from Frodsham. The recently ploughed fields were being propagated, meaning any chance of a Wheatear was going to be remote, and the rest of the walk down to the end of Within Way was quiet. 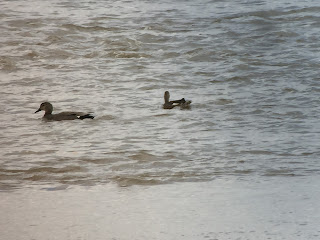 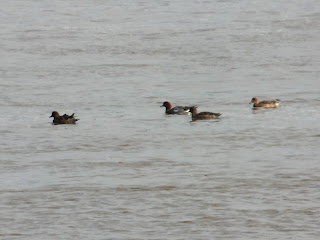 The rocks at the end of Within Way held 37 Wigeon and 12 Gadwall, both quite high counts for this area of the patch. Waders were in short supply but Curlew, Black tailed Godwit, Redshank and Oystercatchers were evident. Walking along the shore to the Lighthouse failed to pick up anything more than a few Linnet, Reed Bunting, Skylarks and a single Rock Pipit. A female Marsh Harrier was scoped distantly over Frodsham, whilst Buzzards still seemed to be everywhere. A little disappointed I started to head back, but had one last look from the end of Within Way. Scanning Runcorn Hill I picked up a gull-like raptor, and as it banked I could see a clear fork - a Red Kite. It continued it's way east along Runcorn Hill, although trying to get a distant shot proved difficult (as proved below!) Although I have seen many already this year on the trains to London it was great to see one on the patch again. 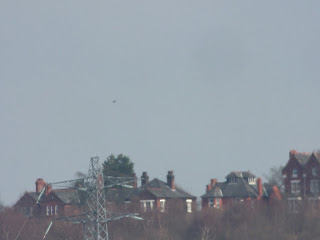 The recently seeded fields on the way back up Within Way were suddenly alive with birds, with about 70+ Fieldfare, 400 Starling, 50 Stock Dove, Skylarks, Linnets and Greenfinch, all jostling for position among the corvids. 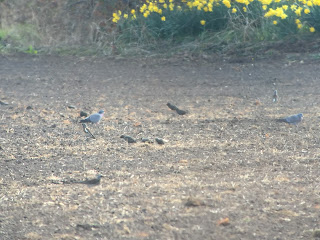 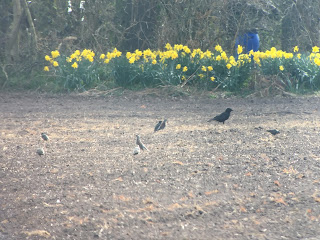 A brief stop at Carr Lane on the drive home failed to add anything further, but the Buzzards were still enjoying the thermals. So another day with no migrants, but Red Kite was my 130th bird on patch this year, so not all bad.