A much milder day than of late with spring like sunshine (finally!); but by the time I got down to patch the temperature was dropping and the sunshine was a little more hazy. However the conditions still seemed set fair for some decent Gulling. 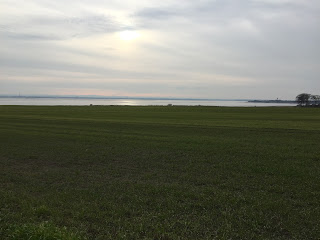 The fields along Lighthouse Lane appeared more spring like, with singing Skylark, Linnet, Reed Bunting and Grey Partridge and a decent gathering of about 70 Curlew fed in the stubble field. It hopefully won't be too long until the first alba Wagtails and Wheatears start appearing. 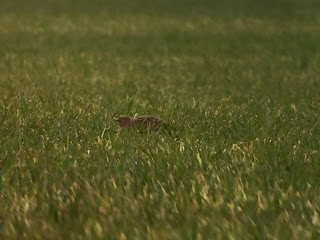 Setting myself up on the bench just to the east of the Lighthouse I had a brief scan of Frodsham Score, but it was quiet. The Swan herd was again sitting miles away and the Canada Geese didn't hold anything more interesting than the dodgy white barnyard Geese. I even failed to pick out a single Egret, the first blank visit for quite some time. The Mersey held 2 Avocet close to the outflow at Frodsham, whilst Ringed Plover numbers continue to rise. 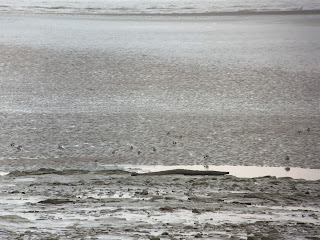 I was joined by Mark Garner as I switched my attention to the Gulls that were slowly starting to build. I quickly picked up a 3rd winter Iceland Gull which flew in from the east and settled down in front of us. On closer inspection it looks like the same bird as earlier in the week, with extensive white bleaching into the tertials. Mark is fairly certain that he had seen this bird earlier in the week at Richmond Bank (possibly indicating where the Gulls go during the day). 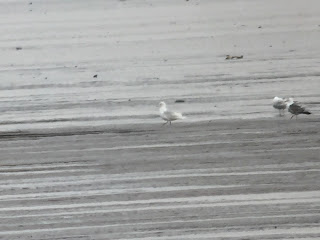 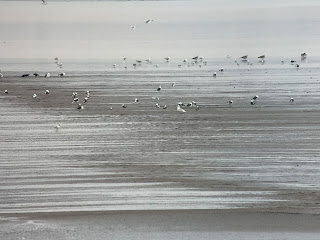 A 1st winter Yellow Legged Gull put in a brief appearance before disappearing into the mass of Gulls. Mark picked up a second Iceland Gull, this time an adult flying in from the east and again pitching down close to the 3rd winter (even from the rubbish picture below the Iceland still sticks out like a sore thumb). 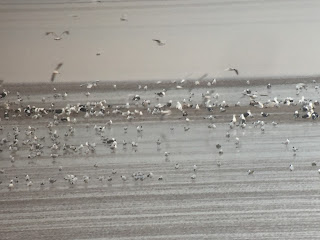 Despite a good movement of Gulls we failed to locate anything further of interest. The Gulls had initially started moving at a decent height (just over the Mersey), but as the wind dropped birds started moving through at all heights making it difficult. Where on other evenings I was fairly confident I hadn't overlooked too much, tonight was a different proposition - I just hope that I didn't overlook a Franklin's, Ross's or the like! 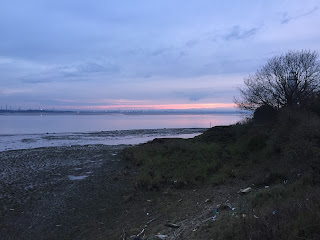 The only slight distraction from the Gulling was the constant small murmerations moving east to the Runcorn Bridge. The entire structure of the Bridge looked black with Starlings from a distance, and I wouldn't even begin to estimate numbers involved, but it was impressive. 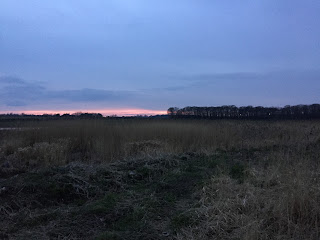 Driving home along Carr Lane I decided to pull in by the flooded field and see whether Iggy's Short Eared Owl was still around. There was still plenty of bird song floating out of the surrounding woodland, and my eye was caught by a few bats floating around. Whilst watching one of the bats (presumably Pipistrelle) I scanned past a large bird flying towards me. It took a few seconds for my brain to connect to my eyes and realise that I was watching a Bittern! Flying in from the direction of Hale Marsh, it landed about 20 meters away from me in probably the smallest clump of reeds on the patch. I have subsequently established that this is only the 3rd record in about 30 years, and the 1st in about 10 years. Fist pumps all round and a cracking piece of patchgold. 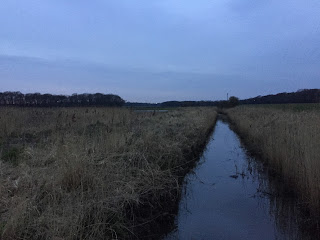 Not a bad way to kick start the weekend, and the next patch visit can't come quick enough. Fingers crossed for some good weather and maybe a few early migrants.