***Warning. This post contains graphic pictures of Corn Bunting, which some people used to my poor record shots will find offensive***

After a few days of strong north-west winds and torrential downpours, today was finally looking more promising. Although the wind was still in the west (not really conducive for a good push of migrants), the weather was at least dry and generally bright. Despite this I was still hopeful that a few migrants may have arrived. 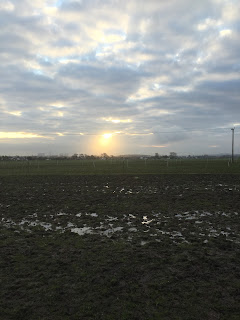 I was up and out early, heading to Burnt Mill Farm just after sunrise. The Skylarks were already in full voice, whilst a couple of Corn Buntings sang from the trees by the farm. The paddocks were quiet, probably due to the male Merlin and a Common Buzzard sat on the fence line at the back. However I picked up a male Wheatear along the hedgerow to my left, and having avoided stabbing myself on the barbed wire and hawthorn, I counted a further 7 Wheatear. But other than a few Linnets, there was a real lack of any Wagtails or Pipits. 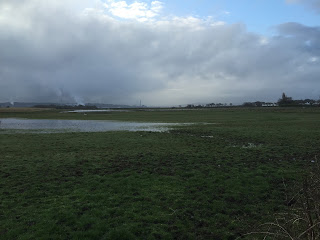 Driving down to the bridge at Carr Lane, I found a further 2 Corn Bunting singing on wires above the road and a little outside of their normal territory. A Water Rail was squealing and 2 Little Grebe whinnying from the scrubby area of the flooded field. Carr Lane Pools was exceedingly quiet, with next to no waders, wagtails or hirundines. I quickly decided to move round to Within Way to avoid the early morning dog walkers. 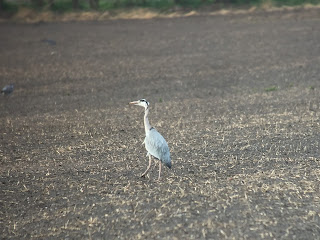 Scanning the fields by the farm I watched a Grey Heron catch and down a mammal (possibly a mouse or shrew?), clearly the local fishing isn't up to much! A single Redwing and 2 Fieldfare were still hanging on, but surely will be on the move very soon. The Little Owl was again yelping from the copse, whilst a group of c.70 Linnet flew around. 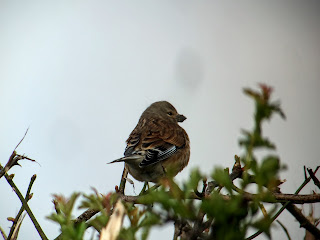 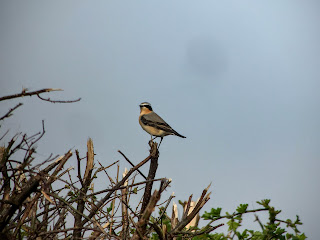 The rest of the walk down Within Way was fairly slow going with 4 Willow Warblers, 3 Chiffchaff, and 6 Grey Partridge. Reaching the end field a scan at least revealed a few Wheatear, Reed Buntings and a few Sand Martin moving through. Looking out over the Mersey and there were at least 17 Avocet feeding on the flats by the Weaver Sluice, whilst I also picked up 5 Tufted Duck flying along the Weaver Bend. A walk along the Shore didn't really produce much other than up to 9 Wheatear, and singles of Kestrel and Sparrowhawk. 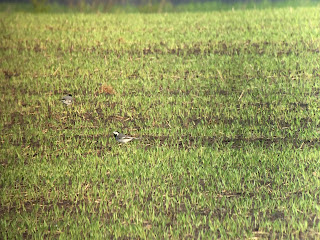 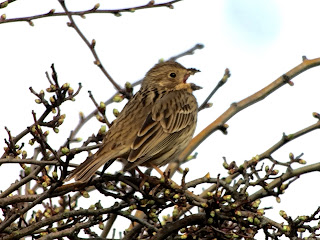 The return walk was marginally more exciting, with a sudden "fall" of c.60 Wagtails, which dropped out of the sky and then moved west within the space of about 2 minutes. Not having enough time to look through all of them properly I estimated that at least 60-70% were White Wagtail. Better still was finding a Corn Bunting singing from a new location. It gave some superb views, which meant that even I could take a half decent pic! A further 11 Wheatear had also appeared in the fields on the walk back, clearly some sort of movement of migrants? 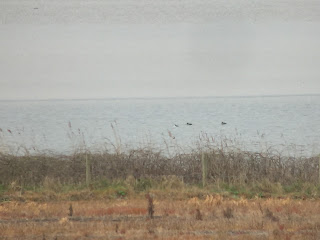 Moving around to Church Lane, I decided again to stop by the end garden to allow me to scan the Mersey for the Eider that was seen on Wednesday. Almost the first birds I picked up were 3 Goldeneye (2 female, 1 male) a surprisingly hard bird to see on patch. Frodsham Score held at least 17 Whooper Swan, 12+ Little Egret but no Great White Egret (where do they go?!). A band of rain was fast approaching from the west and seemed to push a few passerines ahead of it, including a Tree Pipit (my first of the year), c.90 Meadow Pipit, 3 Yellow Wagtail and a few Sand Martin. 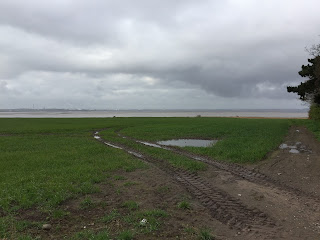 Fortunately it didn't come to much and the sun quickly came out again. The end garden was full of phylloscs (5+ Willow Warbler and 6+ Chiffchaff), but sadly nothing else decided to drop in. The sun at least encouraged a few raptors to get up including a Peregrine, 6 Buzzard and 2 Sparrowhawk. 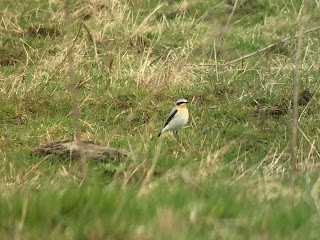 Carr Lane Pools and Hale Marsh were both quiet apart from 6 Wheatear, 17 Redshank, 57 Teal and 2 Shoveler. Again there were no Little Ringed Plover or Yellow Wagtail, presumably the birds from a week ago were not our "local" returners? Another look at Burnt Mill Farm and Wheatear numbers had dropped to 5, but had been replaced by c.20 Meadow Pipit and a single White Wagtail. The 2 Corn Bunting were still singing away, whilst a few more Common Buzzard were now on the wing. 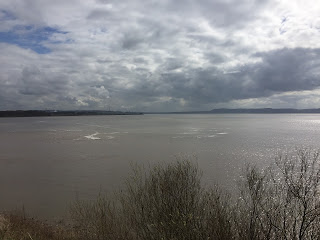 A return multi-tasking visit in the late afternoon produced the expected species in Hale Park, including 4 Nuthatch, Treecreeper and numerous Chiffchaff. Brief stops at Burnt Mill Farm and Town Lane produced near identical results, but 5 Little Egret had decided to make the short hop across from Frodsham to feed on the marsh.

So it feels like migration has stalled a little, hopefully the forecast south-easterlies over the weekend will kick start Spring again.......thank god for Corn Buntings, I swear just listening to them is good for the soul. 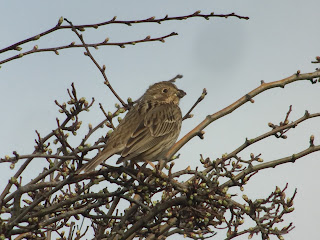 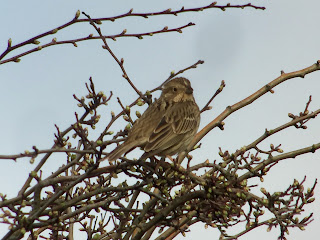